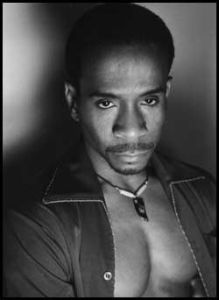 Poet, author, and essayist, G. Winston James was born in Kingston, Jamaica. He immigrated with his family to the United States in 1971 at the age of three, grew up in Paterson, New Jersey, and graduated from Paterson Catholic Regional High School. James, who has lived in New York and Florida for most of his adult life, received a BA in Regional Studies from Columbia University. He earned an MFA degree in fiction from Brooklyn College in 2004 and completed an MBA in Marketing/International Business at the Zicklin School of Business at Baruch College in New York.  Also an avid student of anthropology, James also has lived in Brazil, Spain, and Mexico, where he studied Portuguese and Spanish and learned about the distinctive and multifaceted cultures found in each of these geographical locations.

James was an important activist in New York’s GLBT community.  He served as a Craig G. Harris Fellow for the New York State Black Gay Network’s “Fluid Bodies” project. He chaired and served as the executive director of the Other Countries: Black Gay Expression writers collective. In 2002, James was a founding organizer of Fire & Ink: A Writers Festival for Black GLBT Writers.

James’s prose and essays have been published in For Colored Boys Who Have Considered Suicide When The Rainbow Is Still Not Enough, Think Again, Brooklyn Review, Callaloo: A Journal of African American and African Arts and Letters, Fighting Words: Personal Essays by Black Gay Men, His 2: Brilliant New Fiction by Gay Writers and Waves: An Anthology of New Gay Fiction. James, who is also a former co-editor of Kuumba, an African American gay and lesbian journal, has published his poetry in Freedom in this Village: Twenty-Five Years of Black Gay Men’s Writing, Bloom:  Queer Fiction, Art, Poetry and More, Black Ivy: A Literary and Visual Arts Magazine, Role Call: A Generational Anthology of Social & Political Black Art & Literature, Kuumba:  A Poetry Journal for Black People in the Life, Milking Black Bull:  11 Gay Black Poets, and two Lambda Literary Award-winning anthologies:  Sojourner:  Black Gay Voices in the Age of AIDS and The Road Before Us:  100 Gay Black Poets.

The recipient of a 1997 fellowship from the Millay Colony for the Arts, James published his first collection of poetry, Lyric: Poems Along a Broken Road in 1999; and his second, The Damaged Good, in 2006.  His first collection of short stories, Shaming the Devil, was published in 2009. Along with Lisa C. Moore, he edited Spirited: Affirming the Soul and Black Gay/Lesbian Identity in 2006.  In 2007 he also edited, along with the Other Countries collective, Voices Rising: Celebrating 20 Years of Black Lesbian, Gay, Bisexual and Transgender Writing. James has been a finalist for multiple literary awards including the Lambda Literary Award and the Ferro-Grumley Literary Awards.