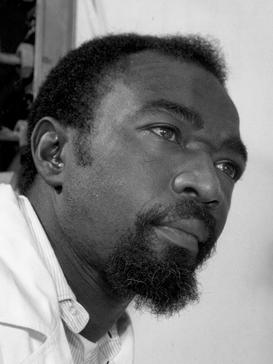 Nuclear chemist James Andrew Harris was born in Waco, Texas on March 26, 1932 to Frank and Martha Harris. Harris’ father passed away when he was young; his mother worked as a school cook. At 12, he traveled to Oakland, California to live with his aunt, Matilda Robinson. After graduating from high school, he returned to Texas and earned a BS in Chemistry from Huston-Tillotson College in 1953. Harris then served in the Army after which he applied for jobs as a chemist. Harris began his career at Tracerlab in Richmond, California in 1955. Shortly thereafter, he met and married his wife Helen (her maiden name was also Harris) in 1957. Helen Harris worked as a schoolteacher and together the two raised five children: Cedric, Keith, Hilda, Kimberly, and James Jr.

In 1960, Harris took a research position at the University of California, Berkeley’s Lawrence Radiation Laboratory (today part of the Lawrence Berkeley National Laboratory, commonly called the Berkeley Lab). It was there Harris became the first Black chemist involved in programs that identified or produced new elements. Harris worked in the Nuclear Chemistry Division’s Heavy Isotopes Production Group. Within this group, Harris helped discover rutherfordium (element 104) in 1969 and dubnium (element 105) in 1970. To create rutherfordium, Harris worked through nearly two dozen separation techniques to prepare targets of purified californium (element 98) to blast with carbon or nitrogen. Fellow Lawrence researcher Albert Ghiorso (of the Manhattan Project) called Harris’ targets “the best ever made for heavy element research.” Racing against scientists in the U.S.S.R. (now Russia) to create new elements, Harris and his colleagues relied on a one-of-a-kind tool—the Super Heavy Ion Linear Accelerator. The Accelerator used high electric current injectors to bombard targets, which resulted in new types of mass, and thus, “superheavy” elements.

Harris led the Heavy Isotopes Group by the early 1970s, despite being the only BA in a group of Ph.Ds. As the head of the group, Harris hoped to create new tools to fight cancer and generate new energy sources.

Even at the height of his career, Harris volunteered as a member of the Parent-Teachers Association, Big Brothers of America, and visited elementary and high schools in the San Francisco Bay area to discuss his work at a nuclear chemist. After retirement he continued working with groups dedicated to drawing Black youth into the sciences. Harris’ brilliance and accessibility, alongside his commitment to family and community, resulted in dozens of awards and accolades from groups ranging from the National Organization for Equal Opportunity in Education to the Urban League.

Harris worked at Lawrence Radiation Lab for 28 years until his retirement in 1988. In the ensuing years, Harris spent time with his family and traveled with Helen to golf throughout the country and in the Caribbean.

After a sudden illness, James Andrew Harris passed away on December 12, 2000 at the age of 68. He was survived by his wife, children, and two grandchildren. Colleagues remembered Harris as a man quick with a joke, a brilliant scientist without pretension, and a “real person who didn’t let success go to his head.” In 1973, Ebony writer Jack Slater described Harris a “sort of hip, scientific soul brother.”