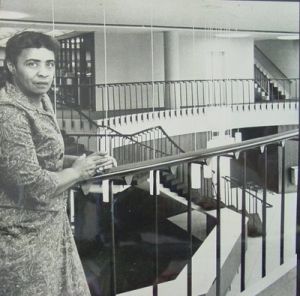 Librarian Alma Smith Jacobs was the first African American to serve as the Montana State Librarian. She was a lifelong advocate of free access to library resources and was active in local and state civil rights causes.

Alma Victoria Smith Jacobs was born in Lewistown, Montana on November 21, 1916. She was one of five children born to Martin Luther Smith, a cook for the Great Northern Railroad, and Emma Louise Riley Smith, a prolific quilter whose work is registered with the Montana Historic Quilt Project. When she was six, her family moved to Great Falls, Montana. After high school, she received a scholarship to Talladega College in Alabama and graduated from there with a bachelor’s degree in sociology and a minor in psychology in 1938.

While Alma Smith Jacobs aspired to become a social worker, she was offered a job as a clerical assistant in the Talladega College library. She remained there for eight years as assistant librarian. During that time she received a scholarship to Columbia University’s prestigious library school, and she traveled back and forth to New York City, New York during the summers to take courses, earning a B.A. in library science in 1942. In 1946 Jacobs returned to Great Falls as a catalog librarian and later served as library director for the city’s public library from 1954 to 1973. During the 1960s, Jacobs was instrumental in the construction of the Great Falls Public Library building that opened in 1967.

In addition to her work on behalf of libraries, Jacobs was active in civil rights organizations and civic groups including the Montana Advisory Committee to the U.S. Civil Rights Commission and Humanities Montana, which she co-founded. She and her sister Lucille Smith Thompson, a reference librarian at Montana State University, developed a catalog of resources on Montana’s black history which they titled The Negro in Montana: 1800-1945 (1970).

On December 15, 1997, Alma Smith Jacobs died at the age of 81 in Bozeman. In 2009, the Great Falls Public Library dedicated a new outdoor plaza in her honor. The community also established the Alma Smith Jacobs Foundation to address social and economic issues.