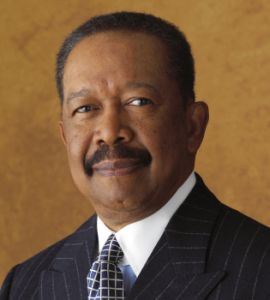 John E. Jacob, civil rights leader, former president of the National Urban League, business executive, and administrator, was born to Claudia and Emory Jacob in Trout, Louisiana on December 16, 1934. Jacob’s father, Emory Jacob, was an impoverished Baptist minister who moved his wife and six children to Houston, Texas where he increased his salary with manual labor. While the family’s small home of three rooms with no electricity, gas, or plumbing was difficult to grow up in, Jacob avoided the “syndrome of poverty” due to his parents’ strict Baptist principles. Jacob’s parents taught him to work hard and do well in school.

Jacob’s persistence and zeal in school earned him a scholarship to Howard University in Washington, D.C in 1953.  He graduated with an economics degree in 1957 and then served briefly in the army.  He was discharged at the rank of second lieutenant. Jacob returned to Washington, D.C. and found it difficult to get a job until Texas Senator Lyndon B. Johnson interceded for him.

Jacob married accountant Barbara Singleton on March 28, 1959. Singleton and Jacob have one daughter named Sheryl Renee Jacob. Jacob was hired as a post office clerk in the late 1950s. Shortly afterwards he began working for the Baltimore Department of Public Welfare while simultaneously pursuing a master’s degree in social work at Howard University, which he received in 1963.

In 1965, two years after receiving his master’s, Jacob was hired as director of education and youth incentives for the National Urban League’s (NUL) branch in Washington, D.C. The local League’s objectives included helping District of Columbia African Americans fight discrimination in housing, government services, and employment. Due to his work during the racially tense summer of 1967, Jacob was appointed executive director of the NUL’s Washington branch in 1968.  Twelve years after his appointment as executive director of the Washington branch, Jacob in 1980 became the chief executive of National Urban League.

As president of NUL, Jacob promoted self-help including encouraging grass roots efforts to address matters such as crime, single parenthood, and male responsibility for fatherhood.  Jacob also promoted efforts to improve educational and employment opportunities for African Americans. In opposition to the policies of President Ronald Reagan, who called for reduced spending on urban problems, the NUL, under Jacob called for an “Urban Marshall Plan.” Jacob continued to promote his plan with both Presidents George H. W. Bush and Bill Clinton, but in the end, neither administration embraced it.  Jacob’s greatest achievement with NUL was the establishment of the Permanent Development Fund, which started as a $4.5 million Ford Foundation grant and grew to a $15 million fund by 1994.

In 1993, at the age of 59, Jacob announced his retirement from the presidency of the National Urban League.  Jacob, who had already been on the Anheuser-Busch board for three years, upon retirement in 1994, was named executive vice president and chief communications officer for the corporation. Jacob directed public relations, including consumer and business matters for Anheuser-Busch until 2006.  He remains on the Anheuser-Busch board of directors. Jacob is a member of Sigma Pi  Phi fraternity.