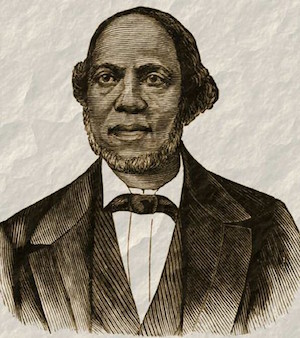 Jacob C. White Sr. was a leading entrepreneur in early black Philadelphia, a tireless opponent of slavery and racial discrimination, and one of the wealthiest men in Philadelphia during his lifetime.

Born in the Kensington section of Philadelphia, Pennsylvania, in March of 1806, Jacob Clement White Sr. was the son of Martha Cecelia and George Christopher White. White married Elizabeth Bustill Miller, a seamstress, and together they had eight children; Jacob Jr., Martha, Mary Ann, Martin, Joseph and George. White purchased and sold several homes in Philadelphia, Pennsylvania, for his growing family, and additionally worked as a barber, dentist, bleeder (a person who applied leeches and heated glass cups to drain infections from the body), unlicensed physician, and store owner. In 1847 White purchased five and a half acres of land at Ninth and Lombard Streets in Philadelphia that he converted into one of the city’s black-owned burial grounds, Lebanon Cemetery.

For over forty years, White was a ruling elder of First African Presbyterian Church and the first president of the board of trustees and until his death in 1772. He also served as Sunday school superintendent, under the direction of his close friend, Rev. William Catto. Deceased church members and friends were once buried on the grounds of the church, at its first location, Seventh and Shippen Streets (now Bainbridge Street). Once White established the Lebanon Cemetery, the bodies on the church grounds were re-interred there. White’s office, located on the cemetery grounds, was the site of meetings with local abolitionists and a distribution point for anti-slavery newspapers. The cemetery itself became a station stop on the Underground Railroad. After the closing of Lebanon Cemetery in 1902, the bodies were re-interred in Eden Cemetery, located in Collingdale, Pennsylvania.

In 1852 the Pennsylvania Abolition Society (founded in 1775) organized a new interracial Vigilance Committee, a group that was active in the Underground Railroad. The committee was chaired by William Still but included Jacob Clement White and Robert Purvis among other members. White also belonged to the Free African Society (one of the oldest black mutual aid organizations in the nation) and the Pennsylvania Anti-Slavery Society. He and Sarah Mapps Douglass, a prominent abolitionist, educator, and painter, founded the Gilbert Lyceum, a literary society for the African Americans in Philadelphia. The Gilbert Lyceum, which promoted education among the city’s black population, hosted speakers such as Frederick Douglass and Henry Highland Garnett.