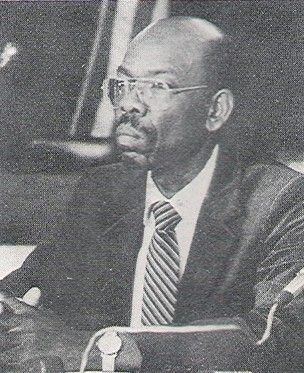 Joseph Jackson was the first African American to serve as the mayor of Pasco, Washington.  Jackson was one of the many black migrants who moved to the small town of Pasco in southeastern Washington in 1948. Most of those migrants came to work at the Hanford Nuclear Reservation where employees made plutonium for use in America’s nuclear arsenal during the Cold War.  Jackson worked for various contractors at Hanford in Mechanical Engineering and Design and Supervision and Management until his retirement in 1996.

When many black migrants settled in the Tri-Cities, named for the three cities of Richland, Kennewick, and Pasco, they found that conditions were not as they had envisioned. Instead of the anticipated racial equality and tolerance, black workers experienced discrimination and harassment from the white community. In fact, in 1948 Pasco was the only community in the Tri-Cities where African Americans could reside, and only if they agreed to live east of the railroad tracks that divided the town.

Racial conditions were worse in neighboring Kennewick, which was known as the “Sundown Town” meaning municipal authorities did not allow any African Americans to enter the city after dark.  At that time, only permanent Hanford employees could live in the government town of Richland and blacks could only be hired at temporary positions.

The racial antagonism many blacks encountered in the Tri-Cities prompted Joe Jackson to dedicate his time to community service, civil rights, and charitable activities over the decades.  Relatedly, Jackson believed education was important and pursued a college education first at the local community college, Columbia Basin College, where he earned an Associate of Arts and Science degree, and later at Eastern Washington University in Cheney where he graduated in 1984.   One year after earning his B.A. degree from EWU, Jackson was appointed to the board of trustees of the university, serving there for the next seventeen years.  He chaired the board from 1988-1989.

Jackson also became involved in local politics.  He successfully ran for the Pasco City Council in 1981 and was elected mayor two years later.  His two terms as mayor extended from 1983 to 1987, and again from 1989 to 1991. Jackson was also a councilman in the Pasco City Council for a total of twenty-two years, serving from 1981 to 1992.  He was elected again in 1996 and served until his retirement in 2007.
Joseph Jackson continues to live in Pasco, Washington.