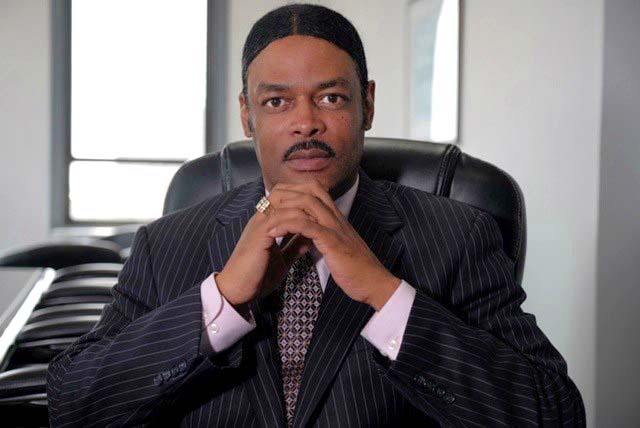 Isaac Wright Jr. is an African-American criminal and civil attorney, consultant, entrepreneur, and philanthropist. Wright became the only person in U.S. history to be condemned to mandatory life sentence plus 70 years in prison, to secure his own release and exoneration, and then be granted a license to practice law by the very court that condemned him.

Wright was born in January 23, 1962 in Moncks Corner, South Carolina, the son of Isaac, Sr. and Sandra B. Wright. Wright has five siblings. Wright is also the father of one daughter, Tikealla. Prior to life in prison, Wright was married, was a successful entrepreneur, and had founded the girl group Cover Girls, which featured his ex-wife Adriel (Sunshine) McNair Wright.

In 1991 Wright was convicted as the mastermind of a large-scale New Jersey drug ring and was imprisoned in that state. During the trial, at the Somerset County courtroom, Wright represented himself and was given a life sentence. Wright always asserted his innocence and claimed relentless prosecutorial misconduct during the trial. Nonetheless, Wright served over seven years in a maximum-security correctional facility in New Jersey. While incarcerated he educated himself on the law and built his own legal defense. During that time Wright also worked as a paralegal, helping twenty of his fellow inmates overturn wrongful convictions. Wright first won a State Supreme Court case for another inmate, using the victory to discredit his own kingpin conviction.

Wright appealed his conviction and sentence on March 12, 1996. The Appellate Court Division initially upheld all of Wright’s convictions except the drug kingpin charge. The other lingering sentences collapsed after the extraordinary hearing where Wright secured the testimony of a veteran police detective to confess that he lied to the jury in Wright’s initial trial. A majority of the Appellate Division judges maintained that the instructions to the jury were inadequate on the kingpin charge although one judge disagreed concluding that the conviction should not be reversed. Because of the disagreement, the State of New Jersey appealed to the Supreme Court. The Supreme Court upheld the judgment of the Appellate Division on May 8, 1996. Ultimately prevailing, Wright was released from prison in 1996 on a $250,000 bail after the New Jersey State Attorney General’s office started investigating Nicholas L. Bissell, the prosecutor at Wright’s initial trial. Wright’s convictions were eventually vacated, and the case finally dismissed in 1998.

Upon release from prison, Wright attended and graduated from Thomas Edison State University, in Trenton, New Jersey receiving a Bachelor’s degree in 2002. Thereafter, Wright attended St. Thomas University School of Law in Miami, Florida and earned a Juris Doctorate in 2007. Wright passed the New Jersey Bar Exam in 2008. The New Jersey State Bar’s Committee on Character investigated Wright for nine years before approval of admission to practice law in 2017.

Currently, Wright serves as a litigator with the law firm of Hunt, Hamlin & Ridley in Newark, New Jersey, primarily practicing criminal law. Wright is also an executive producer along with Curtis (“50 Cent”) Jackson on ABC’s For Life, a television drama series inspired by Wright’s life. Additionally, Wright has founded the Isaac Wright, Jr. Network for Justice, a national online database for legal and social justice nonprofits. Wright has also worked on several justice projects in Spain, Nigeria, Thailand, and Mexico.