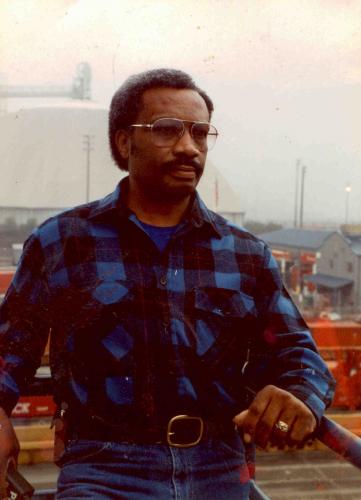 Isaac Morrow, a former foreman at the Port of Tacoma, introduced the concept of on-dock intermodal shipping, which raised the port to national leadership and revolutionized the long shore industry.  Morrow is a member of Tacoma’s Local No. 23 of the International Longshore and Warehouse Union (ILWU), which has a history of black membership dating from the early twentieth century.  Morrow began working on the waterfront as a “casual” without rights or benefits in 1962, in 1963 he registered in the union, moved to “A” status in 1965, and in 1972 became the youngest and only the second black person to be promoted to foreman.  In 1980 he became Terminal Foreman, responsible for an entire pier.

Morrow’s father was a life-long influence, driving his success and that of his siblings.  Morrow was born December 23, 1940, in Frogville, Choctaw County, Oklahoma, the son of a sharecropper and a mother whose family were landowners.  During World War II, his father took work at the Hanford, Washington nuclear facility and gradually brought his family north.  After the war they moved to Tacoma.  Gifted in school but rebellious against a system that didn’t see his college potential, Morrow joined the Marine Corps Reserves and afterward found work as a bartender.

Morrow’s break-through innovation in shipping was driven by necessity.  When he became foreman, Pier 4 was overburdened by traffic, threatening port business.  Trucks carried containers from the dock to regional load centers, where they were loaded onto trains; even though the pier had a rail yard; long shore labor was considered too expensive to load trains.  Morrow had the skills of machine-handling, conceptualization and calculation, and personal leadership to see possibility.  Backed by shipping agent Judith Novik, he assembled a hand-picked team to prove longshoremen could most efficiently and economically offload directly from ship to railcar.  To do so required going against both port management and the union, with its strict job delineations.

The team not only succeeded, but in 1987 set a world record for the number of containers moved by a team of twelve in one eight-hour shift.  The innovation spread quickly along the West Coast, and Morrow was often hired as consultant.  Under his leadership, and despite others’ claims it couldn’t be done, the Port of Tacoma was the first to use overhead straddle carriers for the job.  On-dock intermodal shipping is now standard, although many ports use other equipment.  When Morrow retired in 2004, the entire port stopped work to honor him.