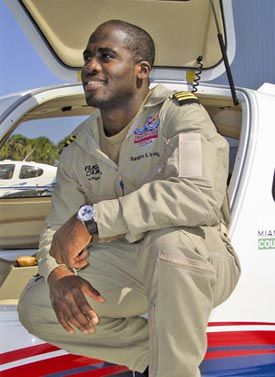 Barrington Irving is the first African American to fly solo around the world and, as of 2010, the youngest person to complete the feat. He made his flight at the age of 23. Irving was born in Kingston, Jamaica on November 11th, 1983. He was the oldest of three brothers. When Irving was six years old, his family relocated to inner-city Miami, Florida. Here his parents operated a Christian bookstore where Irving worked when he was not in school.

Around the age of 15, Irving began to develop a pronounced interest in aviation. A customer at his parents’ bookstore was a United Airlines pilot and invited Irving to visit the airport and tour the cockpit of a Boeing 777 airliner. The tour was a turning point in Irving’s life, which quickly became focused on learning to fly. Soon, Irving was working odd jobs at airports in order to earn flying time in light aircraft while practicing at home with a computer flight simulator.

Irving attended Miami Northwestern Senior High School, juggling school with a variety of jobs, the proceeds of which he used to fund his aviation dreams. He graduated from high school in 2002. Irving turned down football scholarships and instead accepted a Florida Bright Future Scholarship, which helped him to pay for community college classes.

As a result of volunteer work teaching youth about aviation opportunities, Irving was awarded the $100,000 Florida Memorial University/ U.S. Air Force Flight Awareness Scholarship in 2003. This scholarship paid for Irving to attend Florida Memorial University, where he studied aerospace science. It also covered flight training, through which Irving earned several pilot ratings and added flying hours to his logbook.

In 2005, Irving founded the non-profit Experience Aviation, Inc. The corporation was intended to educate and inspire youth about aviation-related careers. Experience Aviation received federally-funded grant money that enabled it to create education programs, give students aircraft tours and install flight simulators for student use.

Irving is most famous for his solo circumnavigation of the planet. Starting in 2003, Irving began obtaining support for his round-the-world attempt, ultimately having Columbia Aircraft put together a Columbia 400 single-engine airplane, called the Inspiration, out of donated parts. With only 600 hours of flying experience, Irving set off from Miami, Florida on March 23, 2007 for his flight. After stopping in various countries in Europe and Asia, Irving returned to Miami on the 27th of June.

He continues to be active in the aviation community and in 2010 began a mission to fly around the world to promote aviation careers.