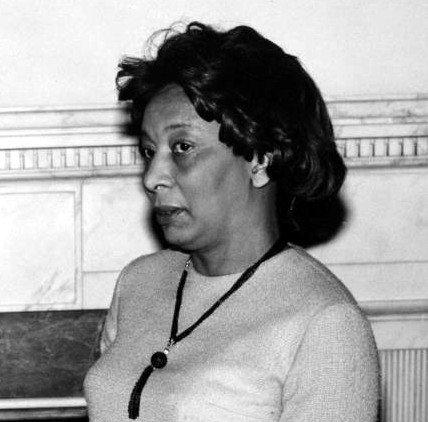 In 1944 Sara Dunlap Jackson became one of the first African American professionals hired by the National Archives in Washington, D.C. where she specialized in western, military, social and African American topics.  She continued at the Archives until her retirement in 1990.  In the following memorial tribute, University of Maryland historian Ira Berlin recalls the remarkable contribution of Sara Dunlap Jackson.

While we recognize and remember Carter G. Woodson as the “Father of Afro-American History,” we often do not recognize giants who facilitated the researching of this history: Sara Dunlap Jackson was a giant among us. This article is dedicated to her and the exceptional reference service provided to those seeking Afro-American history in federal records.

Sara Jackson entered the National Archives in 1944, fresh from a degree from Booker T. Washington High School in Columbia, South Carolina, and Johnson C. Smith College in North Carolina. She had been trained as a teacher, but wartime events seemed to promise more than offered by teaching in the segregated classrooms of her native South. Still, the “colored only,” signs were much evidence in Washington, and the racial division of labor that segregation imposed did not promise much for the young black woman from a small black college in 1944. Sara quietly took up residence deep in the recesses of the Archives’ stacks with little fanfare, and it seems probable that her superior had no sense that Sara’s stay would make a difference to the Archives of the United States, let alone the history of the United States. It has.

Sara did not rest easy in the silence of the stacks. Things were rarely quiet where she took her place. She soon began reading her way through the voluminous aisles: the War Department, the U.S. Army and Navy, the Adjutant General’s Office, the Engineer Department, the Bureau of Colored Troops, and of course, the Freedmen’s Bureau. As no one else—before or since—she mastered them. Her curiosity and determination fused the role of archivist and scholar in a single person, although Sara had no special training in either. In the end, as any one who followed in her wake down the Archives’ stacks understood, Sara Jackson did not know the records of the National Archives, she understood them. When she spoke, they spoke back—perhaps they were the only ones who dared. This archival assistant, without academic degree or scholarly paraphernalia, became one of the most knowledgeable historians of American life.

During the 1950s and 1960s, the study of American history began to stir—pushed by the same changes that were arousing Americans anew to the sad facts of racial inequity and injustice. A new generation of historians, understanding that transformation of the American present required the transformation of the American past, took up the challenge of rewriting our history. When they arrived at the National Archives, Sara Jackson was ready. Before long, the lines before Sara Jackson’s desk were lengthening, as they queued up—chaired professors from great universities with long bibliographies and greenhorn graduate students with blank note cards.

She directed them, gently through the power of suggestion and, then, if they did not get the point—well, Sara had her way. Armed with knowledge squeezed from the records, scholars began to write a new history of the United States. It is no exaggeration to say that history rests, to a considerable measure, on the work of Sara Jackson, for Sara Jackson was a great teacher. In my own case, sometimes I think the Freedmen and Southern Society Project was just an attempt to remember what Sara had forgotten.

The young historians and archivists who were taught by Sara Jackson—her boys and her girls—and I proudly number myself among them—learned many things, and not all of them came out of a Hollinger box. Some of these lessons about how the title on the door often belied the activities behind the door. Sara Jackson, despite her sure knowledge, remained an archivist technician long after her abilities outgrew that title.

There were lessons on human relations, for no one in the National Archives, from the Archivist of the United States to the greatest technician, did not know Sara Jackson, and generally what they knew they liked. Not that Sara was easy or undemanding: quite the opposite. Sara did not countenance fools gladly. She was impatient, and she exacted a price. Hidden agendas would not be accepted. The book had to be open. Honesty, had to be repaid with honesty, generosity with generosity, and friendship with friendship. But if the rules were hard, few did not willingly play, perhaps because we also knew the game was fixed, and Sara guaranteed everyone would be a winner. No one would be more honest, generous, and loyal than Sara.