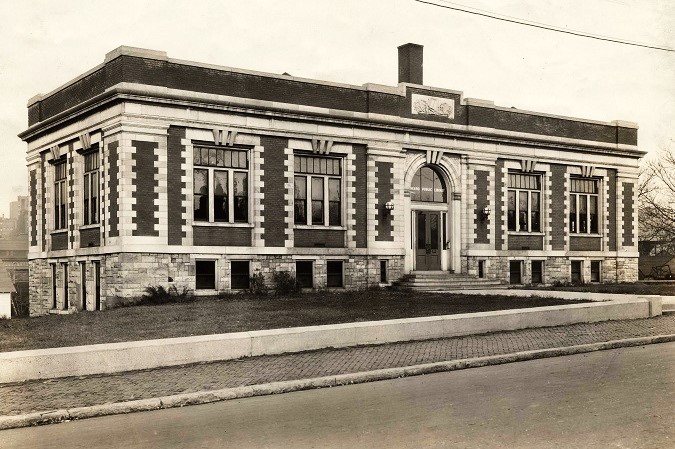 The Negro Public Library (later the Negro Branch of the Nashville Public Library) operated for over thirty years as a segregated library facility in Nashville, Tennessee. It was the city’s first public library for African Americans and one of only a dozen segregated public libraries in the South funded by philanthropist Andrew Carnegie and built between 1908 and 1924. Situated on the southeast corner of Hines and Twelfth Avenue North, the Negro Public Library closed in 1949.

Carnegie’s library building program was well-known in Nashville by 1912. In 1901, the philanthropist had granted $100,000 for a main public library (completed in 1904 on Polk Avenue) and $20,000 in 1905 for Fisk University’s library, one of only several Carnegie Negro College Libraries opened in the United States.

With encouragement from city librarian Mary Hannah Johnson and the local Negro Board of Trade, Nashville’s city council successfully obtained a second grant from Carnegie in 1912: $50,000 for two branch libraries, one for whites and the other for blacks ($25,000 each). The city’s population at the time was just over 36,500 people, about 33% of which were African American.

The whites-only North Nashville Branch opened in 1915 and the Negro Public Library in 1916. Though Fisk’s library served the occasional non-student, the new branch on Hines and Twelfth Avenue North would be Nashville’s first public library for its African American citizens. It offered separate reading rooms for adults and children on its main level and an auditorium and meeting rooms in its basement.

For 33 years, the Negro Public Library served as a center for intellectual development and community life for Nashville’s African Americans. Over 26,000 people registered as borrowers in the library’s first year. Its location in Nashville’s downtown was nevertheless unusual, since segregated libraries in the Jim Crow south usually opened in their city’s “negro district” at a safe distance from whites. But the city had built the Negro Branch near Fisk University’s original campus, situating it within reach of many of Nashville’s black residents.

Community organizations like Boy and Girl Scouts and the Colored Women’s Chapter of the American Red Cross met regularly at the library. Its opening day collection was only about 2,500 volumes, most of which were by white authors. But the Negro Public Library would soon develop a significant collection of African American literature, including writings by Booker T. Washington and W.E.B. DuBois and subscribe to many important black periodicals of the day from local black newspapers like the Nashville Globe to scholarly serials like The Journal of Negro History. The branch’s first librarian was Fisk graduate Marian McKenzie Hadley; later branch librarians included Olivia Carr Greenway, Hattie Watkins, and Ophelia Lockhart. Under their guidance, the Negro Public Library engaged in many outreach activities, providing services to disadvantaged groups and establishing satellite branches in segregated public schools.

The Negro Public Library closed in 1949, several years before Nashville desegregated its library facilities. The former branch building was later demolished to make room for the Nashville Electric Service, whose building still occupies the site today. The city later placed the Negro Branch’s cornerstone in the courtyard of its Ben West Library, which opened in 1962. Newer branches, for instance the Hadley Park Branch Library, would continue serving a predominantly African-American clientele long after the Negro Public Library’s closure.