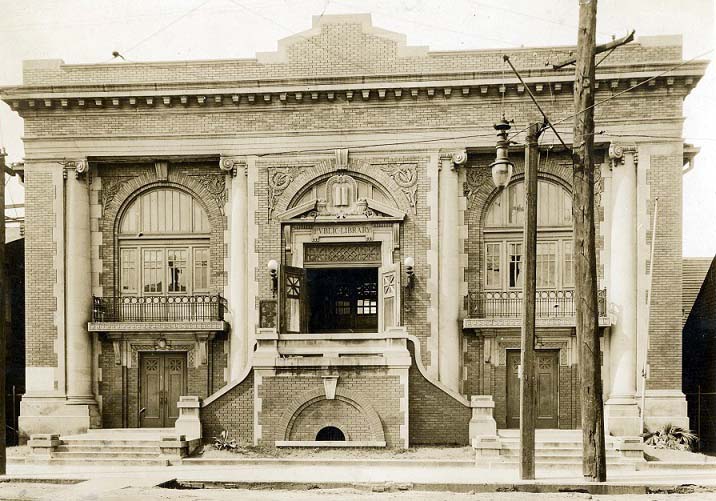 The Dryades Branch of the New Orleans Public Library was the first municipally-supported library for New Orleans’s black citizens and one of a dozen public libraries in the South established for African Americans between 1908 and 1924 and funded by Andrew Carnegie. Opened in 1915, the branch operated for fifty years until hurricane damage permanently closed it in 1965.

The story of the Dryades Branch begins in January 1897, when the newly established New Orleans Public Library opened in St. Patrick’s Hall at Lafayette Square. Though the library’s reading room admitted black attorneys to access law books, it generally did not allow black New Orleans residents to register as borrowers.

In 1906, New Orleans’s city council secured $250,000 from philanthropist Andrew Carnegie for the construction of a new central library and four branches. Located on St. Charles Street at Lee Circle, the central library opened in 1908. The Royal, Algiers, Napoleon and Canal branch libraries opened between 1907 and 1911. Still, none of the city’s public libraries admitted African Americans.

The first step towards a “colored branch” occurred in December 1911, when the Library Board’s president, James Hardy Dillard, requested additional funds from Carnegie. A professor and former president of Tulane University, the Virginia-born Dillard (for whom Dillard University would be named in 1930) was an educational reformer who sought to improve opportunities for African Americans. With help from local clergyman Robert E. Jones, and further encouragement from Booker T. Washington, Dillard secured $25,000 for a segregated library.

After considering at least two sites for the branch, in 1913 the Library Board purchased land at the intersection of Philip and Dryades streets in a neighborhood “largely of colored people.” The site was adjacent the Colored YMCA and a short walk from several churches. Now Oretha Castle Haley Boulevard, this stretch of Dryades was then home to many immigrant- and black-owned businesses. The library’s architect, William Burk, provided adult and children’s reading rooms on the building’s main floor and an ample lecture hall in the basement. Construction began in September 1914; the Dryades Branch was formally dedicated in October 1915. Its first librarian was Adelia N. Trent, who served until 1919.

For fifty years the Dryades Branch served its users well. Many community groups including the Negro Board of Trade, the local branch of the NAACP and Boy and Girl Scout groups, met regularly at the library. School children and adults enjoyed the library’s many services, programs and reading materials. Originally just 5,700 volumes, the branch’s collection would reach 13,000 by 1932 and include works by prominent African American writers. The library also established deposit stations in several of the city’s segregated black public schools.

Even after New Orleans desegregated its libraries in 1955, the Dryades Branch continued serving a predominantly African American clientele. It closed in September 1965 however, suffering damage from Hurricane Betsy. The building sat vacant for years until the Dryades (formerly Colored) YMCA acquired it for community programming. The New Orleans Historic District Landmarks Commission designated it as a city landmark in 1983. As of 2018, the building houses the James M. Singleton Charter School, part of the Orleans Parish School Board.