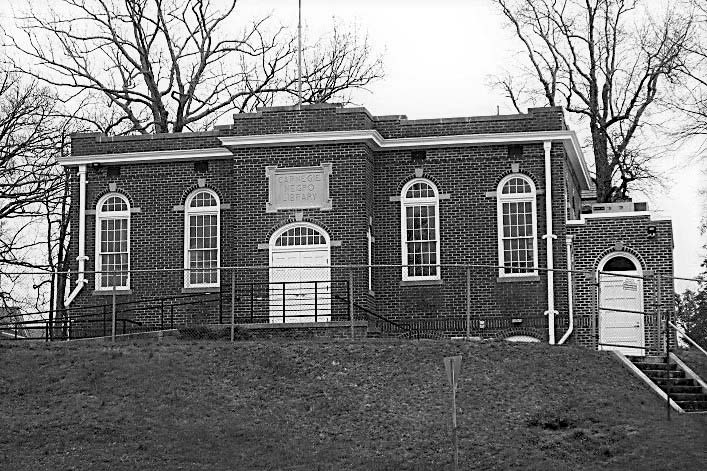 The Carnegie Negro Library’s story began in 1905, when Andrew Carnegie offered Greensboro $10,000 to build a segregated library. The philanthropist had already donated $30,000 towards Greensboro’s main library building, which was completed in 1906 on the corner of Gaston Street and Library Place. Greensboro’s population at the time was 10,035 people, just over 40% (4,086) of whom were African-American. Prolonged debates over proposed sites, however, prevented any action until 1916, when Bennett College offered a site on its campus, in the heart of Greensboro’s “negro district.” Some opposed the plan, claiming that the grounds of a private institution were not ideal for a publicly funded library. Controversy continued to delay the project until 1923, but the library was eventually completed and opened in October 1924.

Although the Negro Library received an annual tax appropriation from the city, it was governed by an independent Board of Negro Trustees, appointed by the Greensboro City Council in 1924. Measuring just over 2,000 square feet, the building was small and its original collection include just 150 volumes. But under the leadership of Martha Sebastian, who served as Head Librarian until her death in 1948, the Carnegie Negro Library blossomed into one of the African-American community’s most vital intellectual centers. Sebastian, whose husband was Dr. S.P. Sebastian (Director of the former L. Richardson Memorial Hospital), grew the library’s collections quickly. She began an African American literature collection in 1925. By 1930, the library’s circulation was the largest of any segregated public library in the state.

The Negro Library also served as an important gathering place for many of Greensboro’s African American community organizations including the Greensboro Art Center which used the library’s basement as its headquarters in the 1930s. The library offered book discussion groups, daily story hours, and seasonal reading clubs for children. When Martha Sebastian passed away in 1948, Mrs. Willie Grimes took over as Head Librarian and remained there until her retirement in 1963.

In some ways, the Negro Library’s success helped contribute to its decline. Demand for books increased the size of its collections, and by 1955 nearly 28,000 volumes filled the small building. A bookmobile program launched in 1945 helped alleviate space issues and extended the Negro Library’s services into rural parts of the county. But by 1960, the library had run out of space.

Following desegregation of Greensboro’s libraries in 1957, the Negro Library merged with the city library system in 1963. It served as the Southeast Branch of the Greensboro Public Library until a new library (today the Vance Chavis Branch) opened in 1966, closing the older branch permanently. The former Negro Library building remains standing and currently serves as offices for Bennett College.