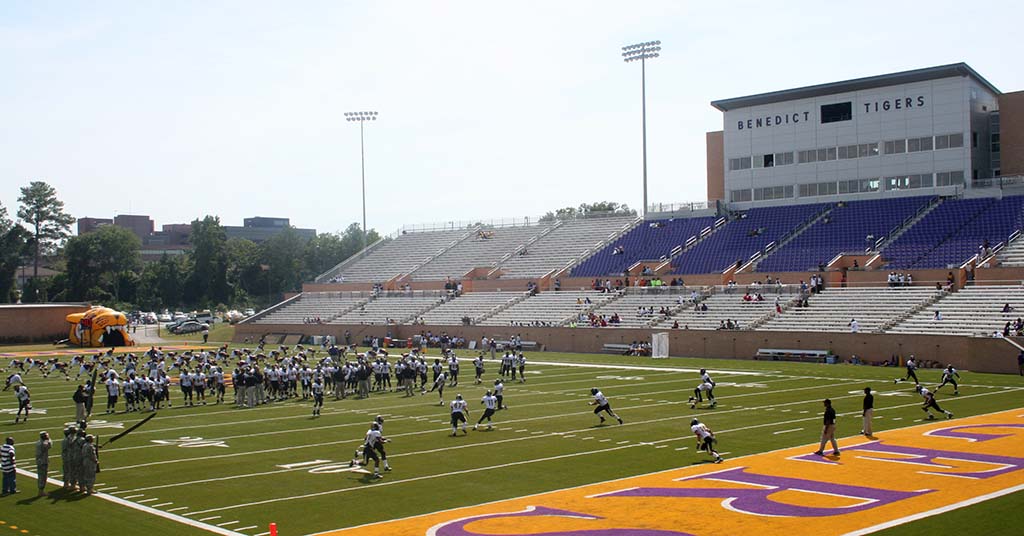 Located within walking distance of downtown Columbia, South Carolina, Benedict College is a private four-year, co-educational, liberal arts college affiliated with the American Baptist Churches, USA.  Benedict College was founded in 1870 by Rhode Island native Mrs. Bathsheba Benedict and the Baptist Home Mission.  Its long-term goal was to educate emancipated African Americans and produce citizens with “powers for good in society.”  Originally called Benedict Institute, on November 2, 1894, through a charter granted by the South Carolina legislature, the institution became a liberal arts college and changed its name to Benedict College.  From 1870 until 1930 Benedict was led by northern white Baptist ministers, but in April 1930 Reverend John J. Starks became the first African American president of the college.  Starks was a Benedict alumnus, class of 1891.

Benedict College is currently one of the fastest growing of the 39 United Negro College Fund schools. Amongst the twenty independent colleges in the state of South Carolina, Benedict with 2,770 students, has the largest undergraduate enrollment, and the second largest enrollment overall.  On two occasions Money magazine has named Benedict among the top seven Historically Black Colleges and Universities (HBCU’s) nationally that offer the best value in American education.  Benedict College has also been recognized by the Knight Foundation for its “commitment to high standards of quality in education” and for its “distinguished record of providing educational opportunities to African-American students.”

Today, Benedict College offers courses in business, government, social and health services, public and private school instruction, and in the civic, cultural, religious, and scientific fields.  According to a recent survey conducted by the American Institute of Physics, Benedict ranks second in the nation in producing African American physics majors. Of the 2,700 students attending Benedict during the 2008-2009 academic year, 97% attended full time, 55% were from South Carolina, 69% lived in on-campus housing, and 3% were from outside the United States.  A recent count showed that the balance between genders on campus was almost precisely equal.  During that same academic year, Benedict had a total faculty of 158, 121 of whom taught full time.