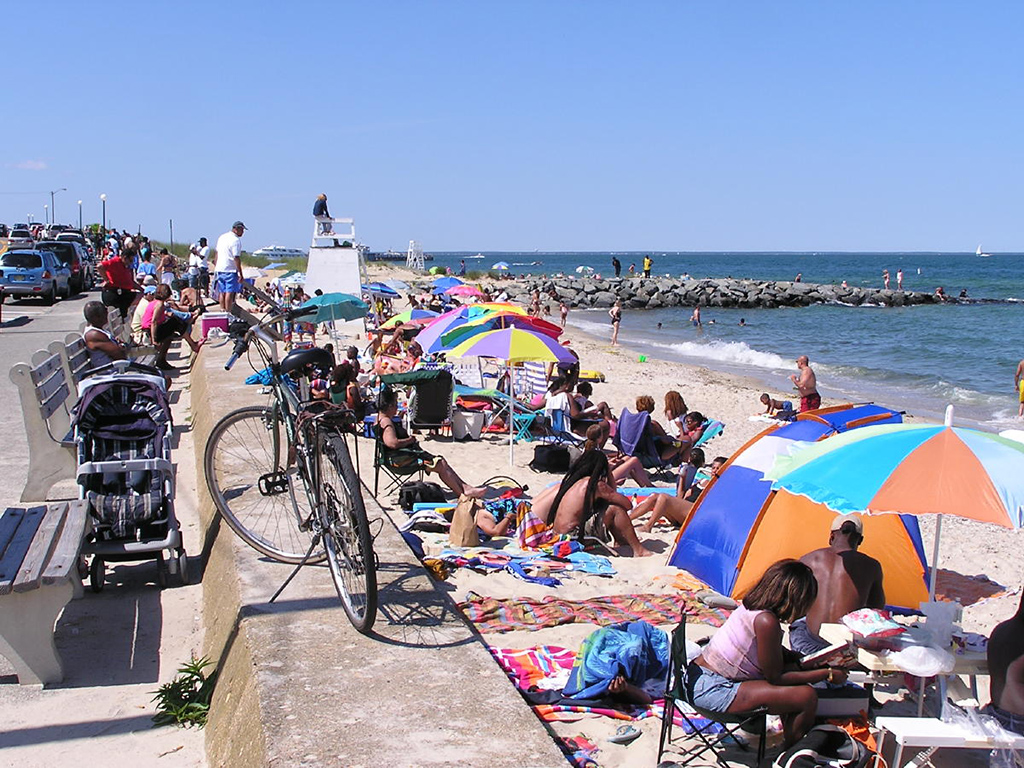 Oak Bluffs on Martha’s Vineyard, part of Massachusetts’ Cape Cod Islands, is one of several historic African American summer resort communities along the Atlantic seaboard founded in the 1890s. The” Inkwell” or Town Beach in Oak Bluffs is the name of the popular beach frequented by African Americans beginning in the late nineteenth century. The strand was pejoratively called “The Inkwell” by nearby whites in reference to the skin color of the beach-goers.  It is the most famous of beaches across the U.S. to transform this odious nickname into an emblem of pride.

Late eighteenth century Methodist and Baptist revival meetings were significant in bringing early white and some black visitors to Oak Bluffs.  The visitors who came sparked the earliest summer resort community growth. Land developers saw money to be made from the religious pilgrims who also arrived to enjoy the secular charms of the Island’s bucolic green interior and pristine oceanfront landscape cooled by sea breezes. By the early twentieth century an increasing number of African Americans came to the Island as servants to white families with summer homes.

Although racial discrimination and restrictive covenants persisted on the Island, some of these early black servants became property owners, year-round residents, and small business entrepreneurs, particularly in Oak Bluffs. Much of the property purchased by these early African American Islanders continues to owned by their descendants.  In the 1920s the African American Islanders began to offer accommodations in their small cottages that attracted black visitors from Boston, New York, Philadelphia, and other Northeastern cities.

Women made up most of the first African American entrepreneurs and played a pivotal role in attracting and accommodating the growing number of black visitors to the Island. Shearer Cottage, founded by Charles and Henrietta Shearer in 1912 as a summer inn, actually began as a laundry operated by Henrietta which opened in 1903.  The Cottage is the oldest and most well-known of these establishments that catered specifically to African Americans. Their daughters, granddaughters, and great granddaughters have continued management of the family’s guest house into the twenty-first century.

As blacks grew more prosperous during and after World War II, many of them now brought their families to Oak Bluffs.  Many of these new vacationers in turn became part-time or permanent residents, augmenting the heretofore small black population.  In Oak Bluffs especially middle-class black vacationers rented at affordable prices or purchased cottages for less than $30,000 from the 1950s through the early 1970s.  By 2010 many of these properties were worth fifteen to twenty times their original sale prices, making Oak Bluffs arguably the wealthiest of the black resort communities.

Also by 2010, workers from Brazil and eastern European countries have replaced the African American service class. The small African American leisure community that first evolved in Oak Bluffs has now spread across all of Martha’s Vineyard and includes far more people.  The community life they now share revolves around social activities anchored by family ties, university affiliations, sorority and fraternity networks, and professional and business relationships. President Barack Obama and his family are perhaps the most famous recent vacationers.  They stayed in Oak Bluffs for their summer vacation in 2009, 2010, and 2011.