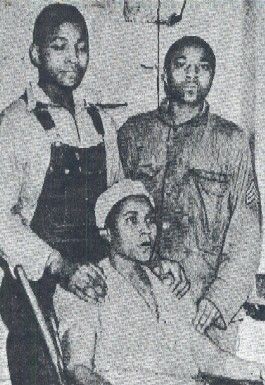 When Rosa Lee Ingram and her two sons received the death penalty in 1948 for murdering a white landowner in rural Georgia, civil rights activists from across the nation rushed to her defense.  The Ingram case represented an example of the emerging Cold War politics of racial protest and helped trigger local challenges to Jim Crow in the southwest corner of Georgia.

In November 1947, Ingram was working on the land she sharecropped near the small town of Ellaville, Georgia when John Stratford, a white neighbor, angrily confronted her about some livestock that had roamed onto his property.  Later testimony suggested that Stratford threatened Ingram sexually.  As Rosa Lee Ingram fought Stratford off, sixteen-year-old Wallace Ingram and fourteen-year-old Sammie Lee Ingram came to her defense with farm implements.  Stratford died from several blows to the head and local authorities soon charged the three Ingrams with murder.  A one-day trial with an all-white jury resulted in death sentences for the three, while a fourth son, Charles, was acquitted in a separate trial due to lack of evidence.

The Ingram case received national press attention during the post-World War II era when the southern justice system and Jim Crow itself were under new scrutiny.  Members of the Atlanta chapter of the National Association for the Advancement of Colored People (NAACP) rushed down to appeal the verdict, providing support to local white lawyer appointed to the case, S. Hawkins Dykes.  The Civil Rights Congress (CRC), a left-based organization, also became involved in raising funds for the Ingrams and publicizing their cause but also generating tensions with the NAACP which harkened back to the political splits seen in the Scottsboro cases of the 1930s.  When the Ingrams appealed in 1948, Georgia courts reduced the death sentences to life imprisonment but refused to take further action.  The NAACP and the CRC’s formal protests thus increasingly stalled due to both strategy conflicts and the continuing power of the southern legal system.

At this point, female activists emerged as a critical political voice on behalf of Rosa Lee Ingram and her sons, often working across traditional alliances of race and class.  For example, the CRC supported the creation of the National Committee to Free the Ingram Family which was headed by Mary Church Terrell, long a leader of the black women’s club movement. This group petitioned the United Nations to address the Ingram case as both a matter of human rights and women’s rights.  Other groups such as the Sojourners for Truth and Justice linked the Ingram case to the failures of the southern legal system, calling upon President Harry Truman to take action.

These women’s organizations helped to keep the story of the Ingram family alive in the press into the 1950s.  The Ingrams were finally released on parole in 1959 after having been judged to be “model prisoners.”  The activism surrounding the case revealed real tensions over leadership and left-based politics but it also demonstrated women’s efforts to highlight gendered critiques of Jim Crow.