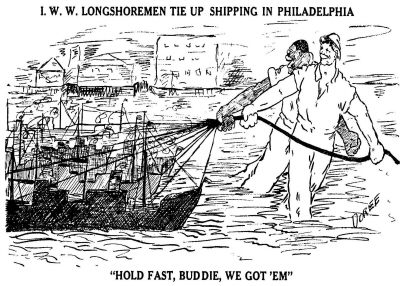 Local 8 was an interracial, multiethnic local that was part of the Industrial Workers of the World (IWW), a militant, left-wing labor union. From its inception, the IWW has been committed to racial equality, though African Americans played a relatively small role in the organization. By contrast, Local 8, a branch of Philadelphia (Pennsylvania) longshoremen, possessed the IWW’s largest contingent of African Americans as well as its most significant black leader, Ben Fletcher.

Also called the Wobblies, the IWW believed in equal treatment for African Americans. Article I, Section I of the IWW Constitution declared that all workers, regardless of color or creed, could join the IWW. The IWW believed that all wage workers, regardless of their ethnic, national, or racial heritage, should identify as workers in opposition to their employers, with whom workers had “nothing in common.”

Local 8 proved the IWW’s ideology could work in practice. In 1913 several thousand longshoremen, who loaded and unloaded ships, joined the IWW because it preached equality and had proven that its militant “direct action” tactics could succeed. Over the next decade, Local 8 dominated the ports along the Delaware River, despite intense opposition from employers and the government. Beyond many “bread and butter” gains, Local 8 also integrated work gangs, meetings, social gatherings, and leadership posts—all unprecedented among labor unions at that time.

World War I was a transformative experience for African Americans, including those on the Philadelphia waterfront. With newfound job opportunities, about 50,000 African Americans and West Indians streamed into Philadelphia. While some of those migrants who became dockworkers eagerly joined Local 8 because of its racially egalitarian policies and because union membership became their ticket to employment, few had experience with unions. Hence, the hundreds of new Southern black members had little commitment to the union which ultimately weakened the effectiveness of organized labor on the Philadelphia area docks.

In 1922 employers took advantage of postwar America’s changing labor and race relations and locked out the Wobblies. Many of these employers consciously targeting Local 8’s interracialism. Some African Americans stuck with the union, as did most of the European Americans and European immigrants. Still, the union’s hold on the docks was broken. The ability of employers to exploit worker racial antagonism was a major factor in undermining the unity that had previously been established among longshoremen at Philadelphia.

Nevertheless, Local 8 stands out as the IWW’s most inclusive union. It was certainly one of the most progressive unions in the entire nation prior to the rise of the Congress of Industrial Organizations (CIO).