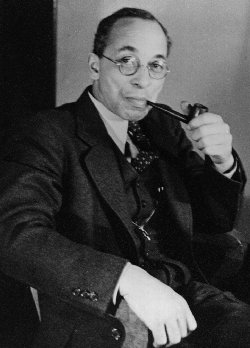 Physicist Elmer S. Imes, an internationally recognized early authority on infrared spectroscopy, was born in Memphis, Tennessee, on October 12, 1883, the son of Benjamin Imes, a minister, and the former Elizabeth Wallace, an ex-slave. Both of his parents were alumni of Oberlin College in Ohio and worked as missionaries in the South. Imes attended high school in Alabama and in 1903 graduated with a bachelor’s degree in general science from historically black Fisk University in Nashville, Tennessee. He remained in academe, teaching physics and mathematics at the Georgia Normal and Agricultural Institute in Albany, Georgia, (present-day Albany State University) and the Emerson Institute in Mobile, Alabama, both historically black schools of higher learning in the racially segregated South.

In 1910, Imes returned to Fisk to teach and earned his master’s degree there in science in 1915. With a strong inclination for research, he enrolled at the University of Michigan and, with the assistance of a University Fellowship, earned his doctorate in physics in 1918, only the second African American to do so since Edward Bouchet, at Yale University in 1876. His dissertation, titled “Measurements on the Near-Infrared Absorption of Some Diatomic Gases,” was published in 1919 in the renowned Astrophysical Journal. That same year, Imes and his former academic mentor at Michigan, Harrison A. Randall, shook the scientific world with a co-authored paper in Physical Review, titled “The Fine Structure of the Near Infra-Red Absorption Bands of HCI, HBr, and HF.”  It elaborated on the journal article by offering the first confirmation of the distances between atoms in molecules, widening the breath of appropriate applications of quantum theory, and presented evidence of two chlorine isotopes—finding that would be repeated cited by scientists and soon contained in textbooks.

In 1919, Imes married the novelist Nella Larsen, one of the luminaries of the Harlem Renaissance, which prompted a change in his residence from Jersey City, New Jersey to New York City, New York to rub shoulders with Harlem’s intellectual elite, among them W.E.B. DuBois and Langston Hughes. Despite his scientific achievements, Imes found it difficult to find employment in white-dominated schools and businesses, but he eventually landed researcher positions in the New Jersey-New York region at the Federal Engineers Development Corporation, the Burrows Magnetic Equipment Corporation, Everett Signal Supplies, and served as a consultant to Autoxygen, Incorporated. During his eight years of work in the corporate world between 1922 and 1930, Imes filed numerous patents, four of which were for instruments that gauged magnetic and electric properties.  Imes may have been better known and respected among European physicists who were unaware of his race than by white American physicists.

Imes returned to Fisk in 1930, this time to mentor black students who would succeed in obtaining graduate degrees at major universities and to become chairman of Fisk’s Department of Physics. Divorced from Nella Larsen in 1933 and later plagued by professional, financial, and health problems, he died from throat cancer in Memorial Hospital in New York City on September 11, 1941.