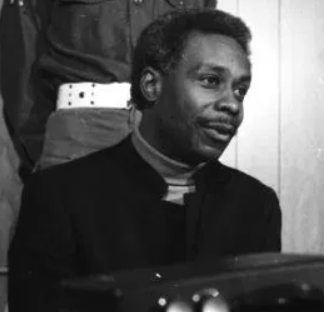 Imari Obadele, black power activist, reparations advocate, and college professor, is best known as co-founder of the Republic of New Afrika. Obadele was born Richard Bullock Henry on May 2, 1930 in Philadelphia, Pennsylvania. His homemaker mother, Vera N. Robinson Henry, and his father, Walter Lester Henry, postal worker, and deacon at Christ Community and Union Baptist churches, were designated the 1966 “Family of the Year” by the Philadelphia Urban League. Raised with eleven siblings in the Point Breeze neighborhood of Philadelphia, Obadele was a Boy Scout and one of six blacks in his graduating class at the public all-male “People’s College,” Central High School. In the 1960s, he adopted the Yoruba name (“the king arrives at home”).

Obadele protested military segregation in 1948 by encouraging blacks to dodge the draft. Two years later, he helped incorporate United Negro Assemblage to address issues of job discrimination, political representation, police brutality, and education, and in 1953, hosted W.E.B. Du Bois’s Philadelphia visit. Obadele moved to Detroit, Michigan and worked as a reporter for the African American newspaper, The Michigan Chronicle (1953-1956) and as a technical writer for the US Army Tank-automotive & Armaments Command. Obadele co-founded the Group on Advanced Leadership (1962), the Michigan Freedom Now Party (1963), the Malcolm X Society (1967), The Republic of New Afrika (RNA), and the National Coalition of Blacks for Reparations in America (1987).

At the March 1968 inaugural RNA meeting in Detroit, hundreds of attendees signed a declaration of independence from the United States and created a government-in-exile. Robert F. Williams, NAACP activist from North Carolina who was then living in Cuba, was the first president of the Republic of New Africa. Other notable cabinet-level comrades such as Bahiyah Betty Shabazz, Queen Mother Audley E. Moore, Chokwe Lumumba, Herman Ferguson, Maulana Karenga, Amiri Baraka, and Jamil Abdullah Al-Amin.

The RNA called for the creation of a Black sovereign nation-state to encompass five US southern states, Alabama, Georgia, Louisiana, Mississippi, and South Carolina. Additionally, it demanded billions of dollars in financial compensation for enslavement and subsequent inhumane mistreatment of black people. The FBI labeled the RNA a “terrorist organization” and dubbed Obadele as a “Key Black Extremist.” The federal government subsequently targeted Obadele in the 1970s, leading to a conspiracy to assault a federal agent conviction.

Obadele served five years in Mississippi jails and federal prisons where he continued to be an unapologetic apostle of African liberation and advocate for Puerto Ricans, Native Americans, and all political prisoners. Obadele received phone calls from Rosa Parks, who made it known to prison officials that she was monitoring their behavioral to ensure his safety. Amnesty International counted him among “prisoners of conscience” being held for nonviolent political expression.

Obadele, who authored several books and articles, earned a political science Ph.D. in 1985 from Temple University and taught at Beaver, Wooster, Oberlin, and William Patterson Colleges. His last position was at Prairie View A&M University (1990-2002). On January 18, 2010, Imari Obadele died at 79 of a stroke in Atlanta, Georgia. “Free the Land!” continues to resonate among thousands of committed RNA followers.