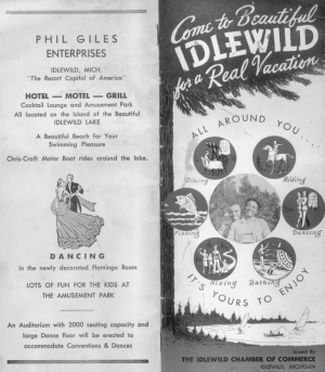 Idlewild, Michigan, was one of the leading African American resorts in the era of Jim Crow segregation.  White land developers marketed Idlewild as an all-Negro resort town in Lake County, Michigan, about 300 miles northwest of Chicago, Illinois and 250 miles north of Detroit, through the Idlewild Resort Company.  Although founded in 1912, resort property sales lagged until Dr. Daniel Hale Williams, the leading black surgeon at the time, became the first famous property owner in 1915.  Williams retired at Idlewild and died there in 1931.  His presence attracted colleagues and associates from Chicago, and eventually prominent black doctors from other Midwestern cities began purchasing property there.

Island Park (an island surrounded by Idlewild Lake), was the center of activity from 1920 to 1945.  It featured the Idlewild Clubhouse, the Oakmere Hotel, and the Purple Palace Supper Club. Prominent African Americans, including Dr. W.E.B. DuBois, author Charles Waddell Chesnutt, millionaire businesswoman Madam C.J. Walker, and Chicago attorney Violette Nealey Anderson purchased Idlewild property.  Anderson donated her property upon her death to her sorority, Zeta Phi Beta. Yet the resort also attracted leading entertainers who made it the “Summer Apollo of Michigan” since the entertainers in turn drew audiences from Chicago, Detroit, and other Midwest cities who came solely for the popular shows.

By the 1950s and early 1960s, Idlewild reached the height of its popularity.  During those years nearly 25,000 vacationers made their way to the community, temporarily overwhelmingly the permanent year-round population.  During this era, Idlewild boasted more than 300 black-owned businesses.

The Flamingo and Paradise nightclubs served as economic engines driving tourism during this period.  The efforts of Phil Giles and Arthur Braggs made Idlewild the nation’s foremost black resort.  Detroit hotel owner Giles managed the Hotel Giles and the Flamingo Club to showcase Idlewild as being “The Resort Capital of America.”  Braggs, a Saginaw businessman, lured thousands to his Paradise Club by hosting entertainers such as Della Reese, The Four Tops, Jackie Wilson, Brook Benton, Dinah Washington, Etta James, Aretha Franklin, and George Kirby.  Idlewild signified black economic empowerment and entertainment glamour.  And while the Flamingo Club did not attract famous entertainers who frequented the Paradise Club, it did showcase local and regional musicians, comedians, chorus girls, and singers such as Larry Wrice and the Flamingo All-Star Band, Luther Thompson and the Flamingo Dancers, Black Velvet (an exotic dancer), Lavern Baker, and Detroit’s Queen of the Blues, Alberta Adams.  The décor–including pink flamingo motifs on the walls and mirrors–assumed iconic status and symbolized affirmation of urban black identity.

While the clubs attracted black patrons, there were often examples of interracial mingling.  As one Idlewild resident recalled, the clubs filled to capacity every night, and on some nights, “there were more white people in there than blacks.  It wasn’t about race, it was about fun.”

Idlewild, like other all-black resorts, would not survive the civil rights movement.  As formerly whites-only clubs and resorts across the nation integrated in the late 1960s, Idlewild went into decline.  Its clubs and hotels closed as blacks began to frequent other resorts. Today, Idlewild is a struggling retirement community with fewer than half a dozen businesses.  Despite this decline, Idlewild symbolized the heyday of the combination of race, leisure, and geography to create a briefly prosperous community through niche tourism.