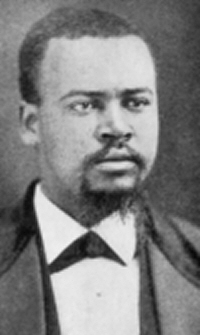 John Adams Hyman was born into slavery on July 23, 1840 in Warren County, North Carolina. Hyman’s thirst for knowledge resulted in him being sold away from his family for attempting to read a spelling book that was given to him by a sympathetic white jeweler. He continued to seek knowledge at his new residence in Alabama and was sold again for fear that he would influence other slaves. Hyman was sold eight more times for his attempts to educate himself.

At the age of 25 Hyman was freed by the Thirteenth Amendment and returned to his family in North Carolina. He quickly enrolled in school where he received an elementary education. Hyman also became a landowner and merchant.  Hyman, a Mason, soon emerged as a leader of the post-Civil War North Carolina black community.

By 1868 John Hyman was an active member of the Republican Party.  Despite intimidation attempts by the Ku Klux Klan, Hyman and 132 other Republicans were elected to a constitutional convention which crafted a new constitution for the state of North Carolina.  The Constitution called for public education available to all students and voting rights for African American men.

Following the 1868 Constitutional Convention Hyman was elected to the North Carolina State Senate from Warren County.  He served in the State Senate until 1874.  In 1872, Hyman was unsuccessful in a bid to become North Carolina’s first black congressman when he campaigned in the state’s heavily African American Second Congressional District.  He ran again in 1874, winning against a white Democrat.  Hyman was the only Republican elected to Congress from North Carolina that year.  The election was contested, however, and Hyman’s term ended before he was officially seated.  Hyman ran again in 1876 and 1878.  Both times he was unsuccessful partly because of accusations of corruption.

While in Congress, Hyman proposed federal funding for Civil War-related damages in his district.  He also called for the reimbursement of the freedmen and women who had lost money in the Federally Chartered Freedman’s Bank.  However, because his seat was challenged his entire term, Hyman was unable to fully make his presence felt in Congress.

In 1878 Hyman returned to North Carolina to farm and run a grocery and liquor store in Warrenton.  He continued to attract controversy.  When members of the Warrenton Colored Methodist Church accused him of embezzling church funds, he assaulted the church’s minister and was arrested and fined for assault.  As he was increasingly ostracized by the local community, Hyman left Warrenton and returned to Washington D.C. where he obtained a series of minor appointive posts including special deputy collector of internal revenue, the U.S. Post Office and the U.S. Department of Agriculture  John Adams Hyman died at age 51 on September 14, 1891.