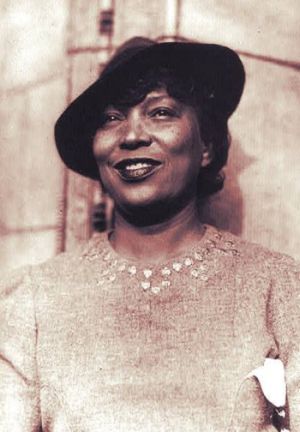 Zora Neale Hurston, known for her audacious spirit and sharp wit, was a talented and prolific writer and a skilled anthropologist from the Harlem (New York) Renaissance to the Civil Rights Era. Born on January 7, 1891 in Notasulga, Alabama, she grew up in the all-black town of Eatonville, Florida.  Her idyllic life in this provincial rural town was shattered with the death of her mother when Hurston was 14 and her father’s unexpected remarriage.  In a few years Hurston was on her own working as a maid.  She settled in Baltimore, Maryland and completed her education at Morgan Academy and Howard University.

Hurston’s talent was readily apparent to her professors including Alain Locke and Montgomery Gregory.  With Locke’s and Gregory’s support her short story “John Redding Goes to Sea” was published in Howard’s literary magazine Stylus in 1921. Locke recommended Hurston’s work to Charles S. Johnson, who in 1924 published her second short story, “Drenched in Light” in Opportunity magazine.

In September 1925 Hurston entered Barnard College, where she studied anthropology with the distinguished scholar Franz Boas. She received her B.A. in 1928.  Throughout this period, however, Hurston continued to write.  In June 1925 her short story “Spunk” was published in Opportunity.   In collaboration with Langston Hughes and Wallace Thurman, Hurston in the late 1920s edited the short-lived magazine Fire!  Collaborating with Langston Hughes, in 1930 she wrote her first play titled Mule Bone, a comedy about African American rural folk life.  Four years later Hurston published her first novel, Jonah’s Gourd Vine, loosely based on the life of her father, a rural minister.  In 1935 she authored Mules and Men, a volume of anthropological folklore.

Hurston’s most famous work, Their Eyes Were Watching God, was published in 1937 followed by Moses, Man of the Mountain in 1939, and Seraph on the Suwanee, the least successful of her works, in 1948. Her autobiography, Dust Tracks on a Road, appeared in 1942.

Hurston’s final years were marked by poverty, difficulty with writing, and estrangement from her family. Though ill, she remained independent until the end. Zora Neale Hurston died in obscurity and was buried in an unmarked grave in January 1960.