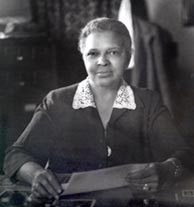 Jane Edna Hunter is most famous for founding the Phillis Wheatley Association (PWA) in 1913.   Hunter was born on December 13, 1882 in Pendleton, South Carolina to Harriet Millner, a free-born daughter of freed slaves, and Edward Harris, the son of a slave woman and a plantation overseer.  Edward Harris died when Jane was ten years old, and her mother urged her into a loveless marriage with Edward Hunter, a man 40 years older than she was. The arrangement collapsed fourteen months after the wedding, and Jane Edna Hunter never married again.

Hunter graduated from the Ferguson Academy and attended the Marshall Law School, passing the Ohio State bar exam in 1925. She was an official in the National Association for Colored Women (NACW), established the Women’s Civic League of Cleveland in 1943, and created the Phillis Wheatley Scholarship Fund. Hunter wrote an autobiography, A Nickel and a Prayer, in 1940.