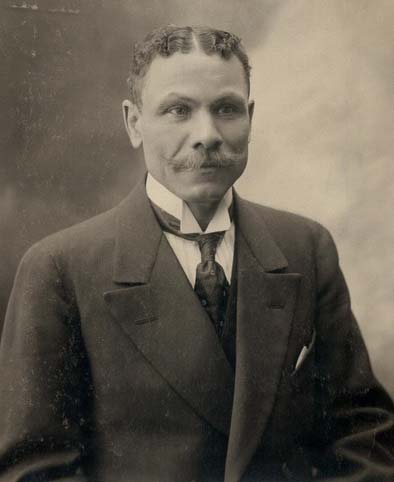 William Henry Hunt, African American U.S. diplomat, was born a slave in Tennessee in 1863. Hunt claimed to have been born on June 29, 1869, so he could get into school at the age of twenty-six posing as a twenty-year-old, a lie he kept to his grave. Although June 29 might have been his actual day of birth, the year 1869 has been disproved.

Hunt was of mixed race and was very light-skinned. His father, William B. Hunt, was a white slave owner who fathered many children with his female slaves and who claimed his own family could be traced back to the Jamestown colony. Hunt’s mother, Sophia Hunt, one of his father’s slaves, was mulatto and had a white grandfather. William H. Hunt had three older sisters, Elizabeth, Margaret, and Frances, and two younger brothers, John and Daniel. In addition to caring for her own children, Sophia also took care of William B. Hunt’s four older white children that he had had with his former wife who died sometime before the Civil War.

After the end of the war, Hunt’s mother took her children to Nashville, Tennessee, where he was enrolled at the McKee School and the Bellevue Academy briefly until his mother required that he get a job to help out the family. Hunt worked as a porter, handyman, and jockey until he decided to go back to school. Hunt attended Lawrence Academy in 1890 and was the only African American enrolled there at the time. He graduated four years later in 1894 and enrolled in Williams College in western Massachusetts in the fall of the same year, but shortly left the school in 1895 due to what he alleged to be racial discrimination. He then worked for the Price McCormick Company as a clerk in New York City, New York.

Hunt met his future wife in 1889, the civil rights leader Ida Alexander Gibbs, daughter of Mifflin Wistar Gibbs, a judge and former state legislator from Arkansas. The couple married in Washington D.C. on April 12, 1904. Earlier, Hunt and Gibbs had become friends and in 1897 when Gibbs was appointed to be the U.S. Consul in Antananarivo, Madagascar, by President William McKinley, he hired Hunt to be his clerk and assistant in 1898. Hunt became vice Consul in May 1899 and was chosen by President Theodore Roosevelt to succeed Mifflin Gibbs as U.S. consul in Antananarivo in August of 1901. In November of 1906, Hunt became the U.S. consul in St. Etienne, France, and remained there until the office was closed in 1927. Hunt then continued to serve as U.S. consul in Guadeloupe in the West Indies, the Azores off the coast of Morocco, and eventually Monrovia, Liberia, where he worked until he retired on December 31, 1932. At the time of his retirement, Hunt had spent more time in U.S. diplomatic posts than any other African American.

William H. Hunt spent much of his retirement writing a memoir about his extraordinary life as a diplomat around the world. Despite his humble origins, Hunt eventually interacted with diplomats from other countries and counted Kaiser Wilhelm II of Germany and U.S. financier J.P. Morgan as among the many prominent people he met. William Henry Hunt died of natural causes in Washington D.C., on December 20, 1951. He was eighty-eight years old but in fact was officially listed as eighty-two.