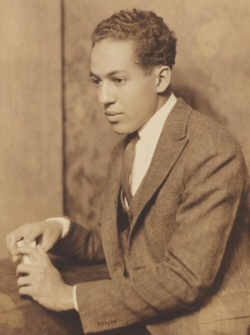 Poet, novelist, playwright, librettist, essayist, and translator, James Mercer Langston Hughes was born in Joplin, Missouri on February 1, 1902, to parents Caroline (Carrie) Mercer Langston, a school teacher, and James Nathaniel Hughes, an attorney. His parents separated before Langston was born and he spent his pre-adolescent years with his maternal grandmother, Mary Patterson Langston, in Lawrence, Kansas.  Mary Langston was the second wife of Charles Henry Langston, a major black political activist in Kansas, and the sister-in-law of former U.S. Congressman John Mercer Langston. After his grandmother’s death, Caroline married Homer Clark, a steel mill worker in Lincoln, Illinois. The couple settled in Cleveland, Ohio with Langston and his younger brother, Gwyn.

Hughes was fiercely independent from an early age. When his mother and brother followed his stepfather who occasionally left the family in search of higher wages, Langston stayed in Cleveland to finish high school. He also had a volatile relationship with his attorney father who pursued work in Cuba and who by 1920 was general manager of an American company in Mexico. Langston Hughes joined his father in Mexico City briefly in 1919, moved back to Cleveland to complete high school, and then upon receiving his diploma in 1920, returned to Mexico City.

Rather than acquiesce to his domineering father’s demands that he pursue a degree in mining engineering, Langston moved to New York City, New York and enrolled in Columbia University. Hughes quit Columbia after a year and decided to acquire a more worldly education. In 1922, he began a two-year stint as a ship’s crewman, during which he traveled to, and spent considerable time in, western Africa, France, and Italy. He also briefly lived in the expatriate community in London, England before returning to the United States in November 1924 to live with his mother in Washington, D.C.  In 1925, he became the personal assistant of historian Carter G. Woodson, the founder of the Association for the Study of African American Life and History.

In 1926, Hughes he enrolled in Lincoln University (Pennsylvania) and earned a liberal arts degree in 1930. His classmates included Thurgood Marshall, a future U.S. Supreme Court justice. While there, he joined Omega Psi Phi Fraternity.

While in college, Hughes often returned to Harlem where he became a major figure in the Harlem Renaissance. Hughes deeply believed that black art should represent the experiences and culture of the black “folk.” Images of rural and urban working-class African Americans filled his poetry and prose, and his writing celebrated blues and jazz culture. Some of his more famous works associated with the Harlem Renaissance include the collections of poems, The Weary Blues (1926) and Fine Clothes to the Jew (1927); the novel Not Without Laughter (1930); and the essay “The Negro Artist and the Racial Mountain” (1926).

Hughes was also politically engaged. During the 1930s, he wrote plays highlighting the injustice of the Scottsboro case and the imprisonment of the black Communist organizer, Angelo Herndon. In 1932, he was among a group of prominent black intellectuals who traveled to the Soviet Union to participate in an ultimately aborted film about black workers in the U.S. After realizing the film would not be made, Hughes decided to use the opportunity to travel across the Soviet Union to learn more about the world’s first Communist nation. During his travels, he spend a brief period in Turkmenistan (then part of the Soviet Union but now an independent nation) before traveling on to China and Japan. Between 1934 and 1935, Hughes lived in California, where he completed one novel and co-wrote the screenplay for the Hollywood film, Way Down South.

In 1937, Hughes spent several months in Spain during its civil war as a correspondent for the Baltimore Afro-American and a supporter of the anti-fascist forces. Even though Hughes began to distance himself from the left after World War II, he was enveloped by the anti-communist hysteria of the Cold War era and testified before Sen. Joseph McCarthy’s Subcommittee on Un-American Activities in 1953.

By the early 1940s, Hughes ceased his peripatetic lifestyle and settled permanently in Harlem. However, he continued to write and interact with fellow Harlem Renaissance writers, such as Arna Bontemps, as well as younger writers he sought to encourage like Alice Walker.  Langston Hughes died in Harlem on May 22, 1967, at the age of 65.  James Mercer Langston Hughes’ ashes are interred beneath a floor medallion in the foyer of the Schomburg Center for Research in Black Culture.