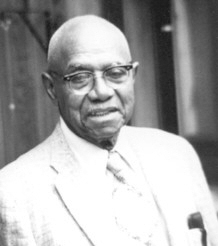 Hosea Hudson was a Communist Party (CP) activist and industrial union organizer in Alabama and Georgia during the 1930s, 40s, and 50s. He embodied the CP’s turn toward black civil rights in the early 1930s and the attraction many working-class southern blacks felt toward the Party during and, in Hudson’s case, well after the Depression decade.

Hudson was born in rural Wilkes County, Georgia in 1898. The son of sharecroppers and the grandson of a former slave, he endured poverty and hunger as a child and received little formal education. He married in 1917, had his first and only child a year later, and worked for several years as a sharecropper and common laborer in Wilkes County and Atlanta. In 1924, Hudson moved his family to Birmingham where he found work as an iron molder.

In 1931, Hudson’s life took a dramatic turn when, inspired by the International Labor Defense’s highly publicized campaign to free the Scottsboro Nine, he joined the Communist Party. Fired from his job for his political associations, Hudson spent several months in New York at a party training school where he learned to read and write. He returned to the South in 1934 and for two years worked as party organizer in Atlanta. Back in Birmingham in 1937, Hudson became vice-president of the WPA’s Workers Alliance, established the Right to Vote Club to educate poor blacks on disenfranchisement and proper voting procedures, and served as vice-president of the Alabama People’s Educational Association. From 1942 to 1947 Hudson was president of the CIO’s United Steel Workers Local 2815 and a delegate to the Birmingham Industrial Union Council.

Post-war anticommunism took a toll on Hudson after 1947. He was expelled from the Birmingham Industrial Union Council and fired from his job because of his ties to the CP. From 1950 to 1954, Hudson operated “underground” as a covert Party organizer throughout the South. In 1954, he moved to New York City where he found work as a janitor. He retired in 1965 and settled in Atlantic City. In 1972, he published an autobiography, Black Worker in the Deep South. Hudson remained a devoted member of the Communist Party until his death in 1988.