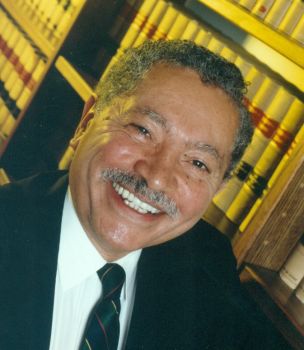 Lembhard G. Howell is a prominent Seattle attorney practicing in Seattle since 1966. Howell’s career has been dedicated to seeking justice for individuals who have been injured and unfairly treated. Howell was the first African American to serve on the board of governors of the Association of Trial Lawyers.  In 1984 he was elected chairman of the Washington State Delegation to the Democratic National Convention.  He has also argued cases in the Washington Supreme Court and is admitted to the United States Supreme Court.

Howell was born in Glengoffe, St. Catherine, Jamaica on May 2, 1936, to Daisy Iona Howell and Cleveland Alexander Howell. His mother brought him to New York in October 1946 along with his brother, Grover, and sister Elaine. Howell earned a bachelor’s degree in History, with Honors, from Lafayette College in 1958. After serving on active duty in the Navy, he earned a law degree from New York University in 1964.

Howell’s career began as a law clerk for the Washington State Supreme Court followed by working as an assistant Washington State Attorney General. His first law firm, Miller & Howell, was formed in 1969 with former Congressman John Miller, becoming Miller, Howell & Watson, before Howell began his own firm in 1973.

Howell’s cases include a landmark 1969 lawsuit that ended Washington State’s construction trade union’s exclusion of African American workers. In 1978 Howell took a personal injury case to the Washington State Supreme Court. He won the case against a general contractor for allowing unsafe fall protection. At the time the $720,000 fine was the largest judgment in King County history.  In 1979 Howell won a Washington State Supreme Court case that upheld affirmative-action employment policies for Seattle firefighters.  He also played a role in the U.S. Supreme Court decision that upheld such policies around the country.

Geov Parrish, “Rebel With An Assortment of Clauses,” Washington Super Lawyers (June 2010); Michael Conant, “Defense Lawyer Loves to Get on Your Case: Lem Howell Asks the Questions that Others Refuse To,” Seattle P-I (March 5, 1989); http://howelllembhardg1.qwestoffice.net.