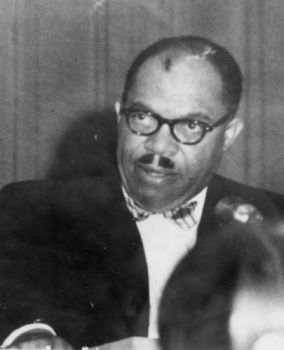 Born March 4, 1908, Theodore Roosevelt Mason Howard was a wealthy doctor, successful entrepreneur, and civil rights activist.  Born and raised in Murray, Kentucky, Howard seemed destined to follow in his father’s footsteps as a tobacco twister until a white doctor at Murray’s local hospital recognized his ambitions of higher education.  Dr. William Herbert Mason delivered Howard and had employed his mother as a cook for several years.  Howard impressed Dr. Mason with his quick ability to learn, sharp intellect, and dreams of a college education.  Dr. Mason gave Howard a chance when he was 15 years old by employing him in the local hospital where he thrived under a variety of jobs.  It was there that he decided the medical field would be his future.

After having proven his work ethic and interest in medicine at the hospital, Howard entered historically black Oakwood University in Huntsville, Alabama in 1924 with the financial support and formal recommendation of Dr. Mason.  After graduating from Oakwood in 1924, Howard continued his undergraduate career as the sole black student at Union College of Lincoln, Nebraska.  After earning a second undergraduate degree, Howard entered medical school at the College of Medical Evangelists (now Loma Linda University) in Loma Linda, California graduating in 1931.  As a sign of gratitude for the doctor who supported most of his university career, Howard added Mason as one of his middle names in the late 1920s.

In 1942, after finishing his medical degree and serving various entry-level medical positions, Howard was appointed first chief surgeon at the hospital of Knights and Daughters of Tabor in Mound Bayou, Mississippi.  While there, he founded a large farm, restaurant, hospital, home construction firm, insurance company, small zoo, park, and the first swimming pool for blacks in Mississippi.  In 1947, Howard left the Knights and Daughters and founded the Friendship Clinic.  In the health field, Howard became well known as a leading (illegal) abortion provider and advocate for legalizing prostitution.

Howard first reached national prominence in 1955 when he became involved in the Emmett Till affair.  Till was a black 14-year-old who, after supposedly flirting with a white woman, was murdered and then thrown into a river.  Howard, who lived near the town where Till was killed, turned his home into a “black command center” for reporters, witnesses, and investigators searching for evidence.  Although the two men charged with Till’s murder were acquitted, Howard continued to speak out for civil rights and relocated to Chicago after receiving death threats for his role in the Till case.

Howard, a lifelong Republican, ran for Congress in 1958 against William Levi Dawson, a South Side black Democrat backed by the powerful William Daley Machine.  He lost to the politically-connected congressman.  In 1972, Howard founded the largest privately-owned black clinic in Chicago, the Friendship Medical Center on the South Side.

In 1935, Howard married prominent socialite Helen Nela Boyd.  Although their marriage would last for the rest of Howard’s life, their relationship was turbulent with Helen nearly ending the marriage in the early 1970s after being frustrated by his numerous extramarital affairs.  He adopted one child, Barrett, and fathered at least eight children out of wedlock.  Howard slowly withdrew from the civil rights activities as his health declined in his later years, and died in Chicago in 1976.