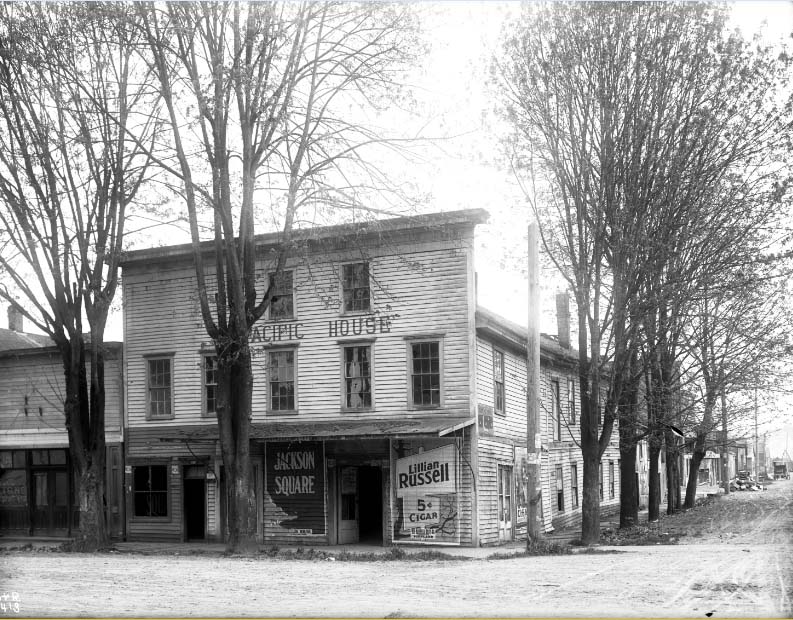 Rebecca Howard, an outstanding hotelier and cook, was one of Olympia, Washington‘s earliest businesswomen. Born in 1827 in Philadelphia, Pennsylvania, Rebecca Groundage married Alexander Howard, a local cooper, in New Bedford, Massachusetts in 1843. By 1859 Rebecca and her husband had moved to Olympia and opened a hotel and restaurant in what would come to be known as the Pacific House Building on Main Street (now Capitol Way). In 1860 Rebecca Howard advertised the building as the “Pacific Restaurant.”

Memoirs of visitors to Olympia record the fine inn keeping provided by Mrs. Howard. The Howard’s hotel and restaurant was frequented by legislators and visitors to the city including President Rutherford B. Hayes and his wife Lucy in 1880. When the building was razed in 1902, the Olympia, Washington Standard said that the Pacific Hotel was the leading hotel on Puget Sound under “the ministration of Rebecca Howard, …whose wit and humor…made the Pacific an oasis in the then desert of travel.”

In June 1862, Mrs. Howard and her husband signed an agreement to take care of Isaac I. Stevens Glasgow, a part-Indian child of American settler Thomas Glasgow, who by most accounts was being mistreated by his father. The Howards officially adopted the child in 1877 and he took the name Frank A. Howard. Frank Howard became a leading citizen of the city, inheriting his adopted parents’ properties and investing in land and development.

When Rebecca Howard died in 1881, twenty-six pages were needed to enumerate her property which was valued at over $6,200.00. Alexander Howard died in 1890. Both are buried in the Masonic Cemetery in Tumwater, Washington.