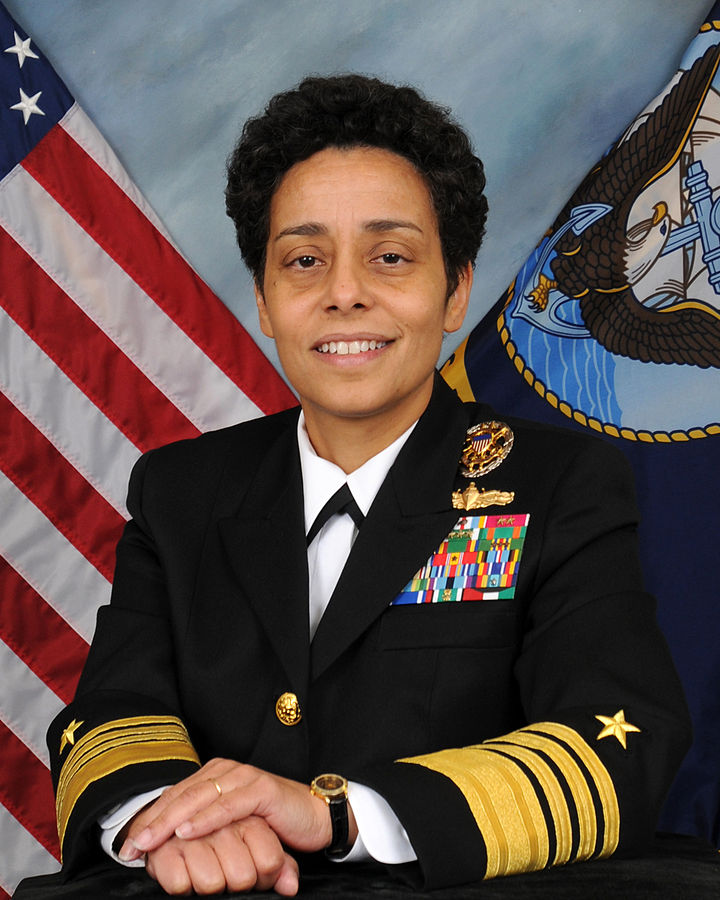 Michelle J. Howard is the first African American woman to command a Navy ship and the first woman of any race to be attain the rank of  admiral.  Born in Riverside, California on April 30, 1960, Howard was one of four children of Air Force Master Sergeant Nick Howard and Scottish-born Philippa Howard. Upon finishing Gateway High School in Aurora, Colorado, she entered the U.S. Naval Academy at Annapolis, Maryland, where she graduated in 1982 with a degree in mathematics and was commissioned as an ensign in the Navy.

Howard’s first sea duty was aboard the submarine tender USS Hunley for three years. In the years following, she served on the aircraft carrier USS Lexington as a main engines officer. She earned the Secretary of the Navy/Navy League Captain Winifred Collins Award, given annually to a female officer who exhibited outstanding leadership. In 1990, she began service on the ammunition ship, the USS Mount Hood, as the chief engineer which resulted in her participation in Operations Desert Shield and Desert Storm. In 1992, Howard reported for duty as first lieutenant on the USS Flint, an ammunition vessel. Four years later, she became executive officer on the docking ship USS Tortuga that sailed into the Adriatic Sea in support of the peacekeeping mission, Operation Joint Endeavor, in the Balkans.  She then sailed to West Africa for a multi-nation training cruise, with six other nations.

In 1999, Howard made history when she captained the dock landing ship USS Rushmore with a crew of more than 400 sailors, thus becoming the first African American woman to command a U.S. Navy ship. From 2004 to 2005, she led Amphibious Squadron Seven, then deployed with Expeditionary Strike Group (ESG) 5 that assisted tsunami relief efforts in Indonesia and security operations in the North Arabian Gulf. In 2007, she was promoted to Rear Admiral.  Howard also led Expeditionary Strike Group 2 from 2009 to 2010, deploying to CENTCOM theater where she commanded Task Force 151, a counter-piracy unit.  She also led Task Force 51, Expeditionary Forces, that made newspaper headlines when it battled Somali pirates and prevented the capture of a merchant ship.  This particular event inspired the movie Captain Phillips. In 2010, Howard was the Maritime Task Force leader for BALTOPS.

In 2013, President Obama lifted the ban on women serving in combat and pushed the effort to place more female soldiers in high level defense positions. After working as chief-of-staff to the director for Strategic Plans and Policy, J-5, Joint Staff, Howard was promoted by the Secretary of the Navy to Vice Admiral in 2012 and held the post Deputy Commander U.S. Fleet Forces. In 2014, she became a full Admiral, the first Navy woman ever to reach a four-star rank.  In the same year, she also became the 38th Vice Chief of Naval Operations. Admiral Howard retired in December 2017.

Among Howard’s recognitions are the NAACP Image Award (2013), Women of Color STEM Career Achievement Award (2008), and the USO Military Woman of the Year (2011). She is married to retired Marine Captain Wayne Cowles.