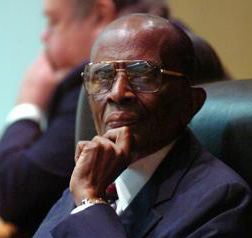 George Howard, Jr. was born May 13, 1924 in Pine Bluff, Arkansas.  He left high school to join the Navy in World War II, serving from 1943 to 1946.  After leaving the Navy he entered the undergraduate and pre-law program at Lincoln University in Jefferson City, Missouri and completed the work necessary to enter the Lincoln University Law School in St. Louis, Missouri.  He elected instead to apply for and attend the Arkansas Law School at Fayetteville, Arkansas, where in 1950 he was one of the “Pioneering Six” black students who desegregated the institution.  His race created controversy when he moved into student housing.  Nevertheless, he held his place and was elected president of his dormitory in his last year of law school, the first black student to hold a student office at the University of Arkansas.

In 1954, Howard received simultaneous B.A. and J.D. degrees from the University of Arkansas.  He was admitted to the bar and began practicing in his home town of Pine Bluff where he and his wife Vivian had four children, one son and three daughters.  While practicing law he served as President of the Pine Bluff Chapter of the National Association for the Advancement of Colored People (NAACP) and President of the Arkansas State Conference of Branches for the NAACP.  His civil rights litigation included acting as counsel for the NAACP in cases related to the integration of Central High in Little Rock and a lawsuit to desegregate the Dollarway school district in Jefferson County, Arkansas where one of his daughters was the first black student registered in the high school.  He was on the team of lawyers (including Derrick Bell, Jr. and James M. Nabrit III) that persuaded the United States Supreme Court to hold in Rogers v. Paul (1965) that the Fort Smith School District’s integration plan of “one-grade-a-year” was unconstitutionally slow.

On January 1, 1979 he returned briefly to private practice.  In July, 1979, Governor Bill Clinton appointed him to the newly-created Arkansas Court of Appeals.  In June, 1980, President Jimmy Carter appointed him to the federal bench as a district court judge holding a commission in both the Eastern District and the Western District of Arkansas.  With that appointment he became the first black federal judge in Arkansas.

While a federal judge, he presided over the bank fraud trials arising out of the Whitewater real estate scandal in which President Bill Clinton and First Lady Hillary Rodham Clinton were alleged to have been involved.