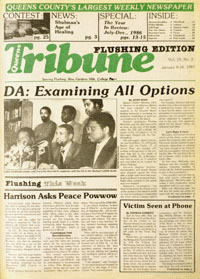 In the 1980s, several racially motivated attacks dominated the headlines of New York City newspapers.  On September 15, 1983, artist and model Michael Stewart died on a lower Manhattan subway platform from a chokehold and beating he received from several police officers.  A year later, on October 29, an elderly grandmother, Eleanor Bumpers, was murdered by a police officer in her Bronx apartment as he and other officers tried to evict her.  Later that year, on December 22, a white man, Bernhard Goetz, shot and seriously wounded four black teenagers he thought were going to rob him on a subway train in Manhattan.  The Howard Beach racial incident in late 1986 propelled the predominantly Italian and Jewish community into the national spotlight, exposing racial hatred in New York City.

On the early morning of December 20, 1986, a white mob attacked three stranded African Americans in Howard Beach, an insular predominately white community in the borough of Queens.  On that night, four African American men, Cedric Sandiford, 36, Timothy Grimes, 20, Michael Griffith, 23, and Curtis Sylvester, 20, were traveling in a 1976 Buick from their Brooklyn neighborhood to Queens to collect Griffith’s paycheck.  When the Buick stalled on Cross Bay Boulevard, near Howard Beach, Griffith, Sandiford, and Grimes walked to Howard Beach to locate a pay phone.

The three entered Howard Beach at midnight and were immediately confronted by a small group of white pedestrians, who yelled racial slurs and told them to get out of their neighborhood.  However, by then hungry and tired, the men decided to dine and rest at the New Park Pizzeria on Cross Bay Boulevard.

The mob attacked Griffith and Sandiford.  Grimes, who drew a knife on the angry mob, escaped with minor injuries.  Sandiford begged, “God, don’t kill us” before Lester knocked him down with a baseball bat.  With the mob in hot pursuit, the severely beaten Griffith ran the nearby Belt Parkway where he jumped through a small hole in a fence adjacent to the highway.  As he staggered across the busy six-lane expressway, trying to escape his attackers, he was hit and instantly killed by a car driven by Dominic Blum, a court officer and son of a New York police officer.

At 1:00 a.m. when the police arrived at the scene, they encountered a bloody and dazed Sandiford nearby, walking west on the parkway.  The officers brought him back to Griffin’s lifeless body on the parkway.  Initially he was considered a suspect and placed in a squad car.  The officers refused him medical attention and forced him to tell his version of the assault several times until dawn. That morning New York Mayor Edward Koch and African American police chief Benjamin Ward condemned the crime in the media.  Koch compared the incident to a lynching while Ward scolded the Queens commanding officer for his officers’ insensitivity toward Sandiford.

On December 21, 1987, the jury found three of the four principal defendants guilty of second degree manslaughter and first degree assault, but innocent on attempted murder and riot charges.  Jon Lester was sentenced to 10 to 30 years in prison.  Ladone received a 5 to 15 years sentence, and Kern was sentenced 6 to 18 years in prison. The jury acquitted Michael Pirone of all charges.  The other participants received lighter sentences, and in most cases, community service.