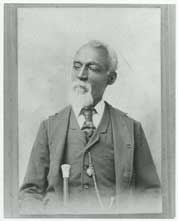 The trusted slave of legendary Texas independence leader and later governor, Sam Houston, Joshua Houston, after Emancipation, succeeded in business and politics, founded numerous institutions, and became a symbol of racial autonomy and progress. Born a slave in 1822 and later willed to Margaret Lea of Marion, Alabama, Joshua was brought to Texas in 1840 with Lea to unite with her new husband, President Sam Houston of the Republic of Texas. Unlike many slaveholders of the time, President Houston encouraged his slaves to read and write.  Joshua Houston became literate and was soon known in the region as intelligent and industrious. Joshua Houston, as servant to President Houston, became a well-known coachman of public dignitaries.  He was also the blacksmith and wheelwrignt.

In 1862, an infirmed Sam Houston, who as governor opposed secession, freed Joshua and his entire slave staff.  Months later, a grateful Joshua Houston offered penniless Sam Houston’s widow Margaret Lea Houston $2,000 in gold, his life savings.  She refused the gesture, and encouraged him instead to use the money for his family.  Houston married three women in his lifetime and had eight children, including Atlanta University graduate and celebrated educator Samuel Walker Houston.

Freedman Houston bought property, built a home, and opened a prosperous blacksmith shop.  Houston and other freedmen then in 1867 founded the Union Church, Huntsville, Texas’s first black institution.  He also led the effort to establish a small school for African American children in the same community.  Joshua Houston entered local politics, serving as a Republican alderman in Huntsville and county commissioner in Walker County.  A lifelong advocate of education, he secured funding for the building in 1883 of another school, Bishop Ward Normal and Collegiate Institute. His son, Samuel Walker Houston, in turn, founded the first high school for black students. Joshua Houston died in 1902 in Huntsville, Texas.  He was 80.