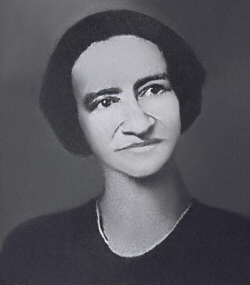 The self-trained historian and journalist Drusilla Dunjee Houston was born in Harper’s Ferry, West Virginia in 1876. Her parents were Rev. John William and Lydia Taylor Dunjee. Drusilla’s younger brother Roscoe was a journalist and Civil Rights activist in Oklahoma City. In 1915 he founded the black newspaper the Black Dispatch, and immediately Drusilla became a contributing editor and dedicated columns to the racial uplift of African Americans.

Houston became the quintessential race woman during the time she lived. Influenced by DuBois’ The Negro (1915), which discredited white racist scholarship that Africans had no history, Houston without the help of research assistants, philanthropic funding, or access to many research repositories set out to write a three volume study on the influence of ancient Cushites in the Nile Valley, India, Europe, and America. In fact, after the publishing of her now classic Wonderful Ethiopians of the Ancient Cushite Empire (1926), she wrote DuBois a letter in 1926 thanking him for inspiring her and informed him that she was not trying “reach the white race.” Her book was dedicated to people of African descent and she wanted to debunk the racist notions of the “Klan and all race haters.”