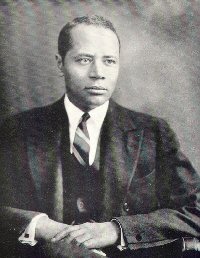 Charles Hamilton Houston, a renowned civil rights attorney, is widely recognized as the architect of the civil rights strategy that led to the U.S. Supreme Court’s 1954 decision, Brown v. Board of Education.  He was also a mentor to Thurgood Marshall who successfully litigated the pivotal Brown case.

Houston was born on September 3, 1895, in Washington, DC to parents William Houston, an attorney, and Mary Houston, a hairdresser and seamstress. He attended M Street High School (later Dunbar High School) in Washington, DC. Following graduation, he enrolled at Amherst College in Massachusetts, where he was the only black student in his class. Houston was elected to Phi Beta Kappa, the national honor society. Upon graduating in 1915, he was selected to deliver that year’s valedictory address.

After graduating from Amherst, Houston returned to Washington.  He joined the U.S. Army in 1917 and trained at the all-black officers’ training camp at Fort Des Moines, Iowa in 1917. Houston was later deployed to France. While there, Houston and his fellow black soldiers experienced racial discrimination, which deepened his resolve to study law.

Following his military discharge in 1919, Houston entered Harvard Law School. He excelled in his studies and became the first black editor of the Harvard Law Review. As a law student, Houston was mentored by future Supreme Court Judge Felix Frankfurter. In 1922, as Houston graduated with high honors, Frankfurter nominated him for the prestigious Frederick Sheldon Fellowship, which allowed him to study law at the University of Madrid.

Houston’s legal accomplishments eventually captured the attention of Walter White, the chief executive of the National Association for the Advancement of Colored People (NAACP). In 1935, Houston was hired as Special Counsel to the Association. Eventually, he brought Thurgood Marshall, one of his Howard University law students, into the NAACP.  The pair traveled through the South in the early 1930s and noted the inequalities of black school facilities.  In response, they developed the legal strategy which challenged school segregation, first calling for the equalization of facilities for black students and then eventually calling for full integration.

Houston and Marshall first applied their strategy in 1935 when they took the Pearson v. Murray case, one of the first challenges to racial exclusion in public universities.  Donald Gaines Murray, an Amherst graduate, was denied admission to the University of Maryland School of Law on the basis of his race. Houston and Marshall successfully argued that the state had violated Murray’s rights by failing to provide an adequate law school for his studies while denying him admission to the sole state law school on the grounds of race.

Houston continued to work with Marshall for the next fifteen years, laying the groundwork for the eventual Brown decision. Charles Hamilton Houston, a member of Alpha Phi Alpha Fraternity, died on April 22, 1950 in Washington, DC at the age of 54, four years before the Supreme Court handed down the fateful decision that he had spent a lifetime planning and pursuing.