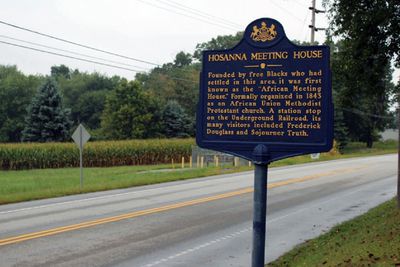 Established by a free African American community in Southeastern Pennsylvania, Hosanna African Union Methodist Church (A.U.M.P.) has been part of local African American history and independent church history since its founding in 1843. Standing at the entrance to Lincoln University in Oxford, Pennsylvania, the one-room, one-story chapel is the last standing remnant of Hinsonville, a historic free black farming community.

Hosanna A.U.M.P. is located seven miles north of the Mason-Dixon Line in Chester County, Pennsylvania. At the time of the church’s founding, enslaved African Americans from neighboring Maryland were given Saturday noon to Sunday evening to themselves, and they helped the freedmen of Hinsonville build the church. These groups constructed a small scale version of larger African American churches in Philadelphia, Pennsylvania, and Wilmington, Delaware.

Hosanna, a small, red-bricked one-story chapel with wooden steps, a wraparound porch, and a pointed roof played a significant role in the pre-Civil War Underground Railroad, often aiding those trying to escape to freedom. There is a tiny secret chamber beneath floorboards in the church that once served as a hiding place for runaway slaves. Harriet Tubman used the little church as one of her stations when she led enslaved people from Maryland into Pennsylvania. Church members often exchanged clothes with fugitive slaves to help the latter avoid capture. They also provided food. In the 1850s, Frederick Douglass praised the church for its work in the field of freedom and self-help for African Americans.

James Ralston Amos, a founding trustee at Hosanna, persuaded a white couple, Rev. John Miller Dickey, a Presbyterian minister, and his wife, Sarah Emlen Cresson, a Quaker, to create the Ashmun Institute (later Lincoln University) in 1853 to train black men to serve as missionaries in Liberia. The Ladies Auxiliary Society of Hosanna A.U.M.P. Church held weekly meetings to help finance the construction of the Institute. The women also fed the construction workers even as they provided and also did missionary work in the area, feeding and clothing the needy. The institute later changed its name to honor President Abraham Lincoln but remained linked with Hosanna.

The church cemetery began in 1854. Surrounding the church, and still in use by the last remaining members of the congregation, the cemetery holds the graves of many Civil War soldiers who were once church or community members. It was one of the first marked gravesites for blacks in this area.

Although there are fewer than twenty members of the church on the official rolls, every Sunday there is standing room only, as the tiny chapel is filled with students from Lincoln University, visitors, and guests, all of whom continue to support the small congregation financially.