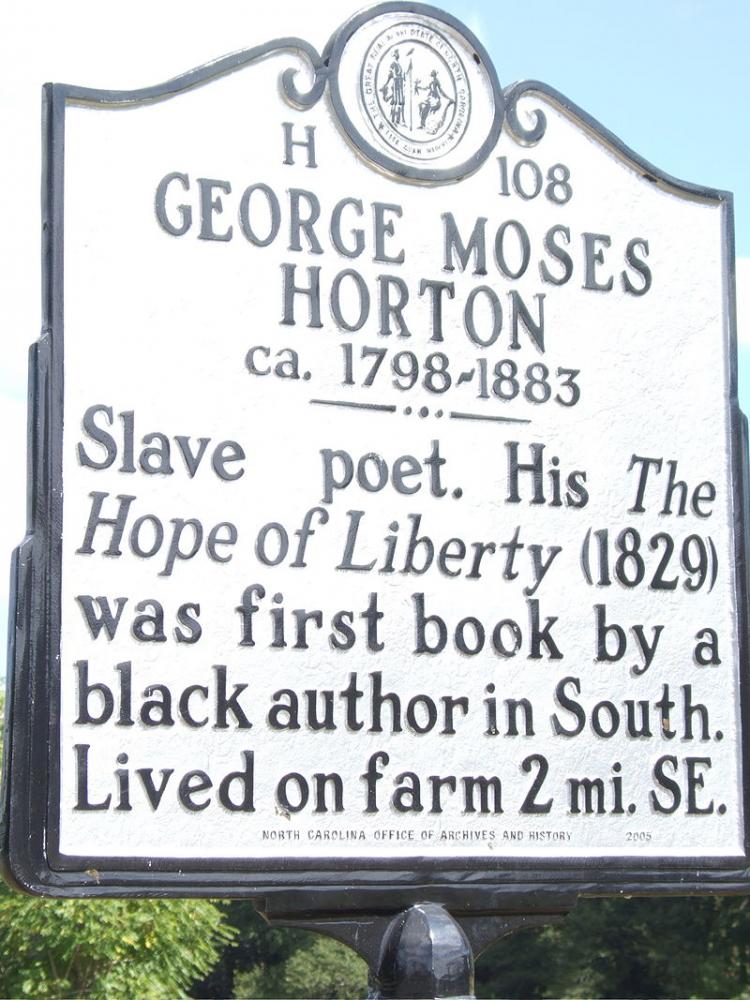 George Moses Horton, the first African American to publish a collection of poetry in the South during the antebellum period, was the author of three collections of poetry: The Hope of Liberty (1829), The Poetical Works of George M. Horton (1845) and Naked Genius(1865).

George Moses was born enslaved to William Horton on a plantation in North Carolina in 1797. In 1800, William Horton, having found land in Northampton County untenable for plantation farming, relocated to Chatham County, North Carolina. George Moses, who spent the next ten years tending cows, soon took it upon himself to learn how to read. Soon after accomplishing his goal, George Moses discovered he preferred poetry over any other literary genre.

In 1814, ownership of George Moses was transferred to Horton’s son, James. Soon after, he began delivering produce to students at the University of North Carolina, Chapel Hill. During his interactions with the students, they discovered within him what they described as “a spark of genius.” George Moses soon began to recite poems on demand. Initially, the poems were acrostics based on the names of students’ girlfriends. He memorized his poems until he could dictate them to students who set the price Horton was paid at 25 cents per composition. The money earned from the sale of his poems enabled Horton to buy his time from James Horton who charged 25 cents a day until James’ son, Hall, raised the price to 50 cents a day.

During this time, George Moses received encouragement from Caroline Lee Hentz, the wife of a Chapel Hill professor. This encouragement included sending an eulogy he wrote to a Massachusetts newspaper for publication which resulted in George Moses’ first published poem, “Liberty and Slavery,” in the Lancaster Gazette on April 9, 1829. He also had poems published in newspapers such as The Register (Raleigh, North Carolina) and Freedom’s Journal in New York City, New York, the first black-owned newspaper in the nation. George Moses’ first volume of poetry, The Hope of Liberty (1829) was designed to be a fundraiser for his freedom but profits were lackluster.

Sometime in the 1830s, George Moses married an enslaved woman. The couple had two children, a boy named Free and a girl named Rhody.

In 1845, his second volume of poetry, The Poetical Works of George M. Horton, the Colored Bard of North Carolina, to which is Prefixed the Life of the Author, Written by Himself, was published.

In 1865, Moses met William S. Banks, an officer with the Ninth Cavalry from Michigan. Banks sponsored Moses’ third volume of poetry, Naked Genius.  With his freedom finally obtained by the 13th Amendment, Moses relocated to Philadelphia, Pennsylvania where he spent his time writing stories for Sunday schools and working for relocated North Carolinians. As the exact date and location of his death are currently unknown, it is not known if he pursued his interest in relocating to Liberia or is buried somewhere in Philadelphia.