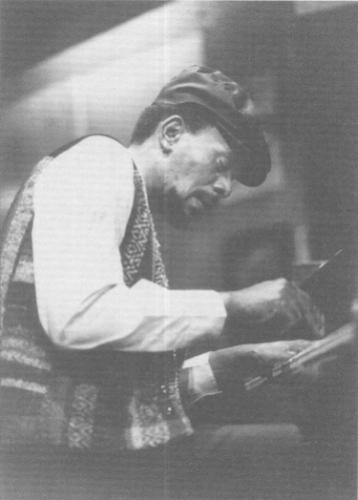 Pianist, bandleader, and social activist Horace Tapscott committed his life to the empowerment of his South Central Los Angeles community.  Tapscott founded the Pan Afrikan Peoples Arkestra and its umbrella organization, the Union of God’s Musicians and Artists Ascension (UGMAA), both of which were at the forefront of the vibrant community arts movement in black Los Angeles in the 1960s and 1970s.

Tapscott was born on April 6, 1934 in segregated Houston, Texas.  His mother, Mary Malone Tapscott, was a professional singer and pianist.  Seeking employment opportunities in the California shipyards, Tapscott’s family moved to Los Angeles in 1943.  Tapscott spent his childhood learning piano and trombone, immersed in the richly diverse Central Avenue night club scene.  After attending Jefferson High School and, later, Los Angeles City College, Tapscott served in the US Air Force, playing trombone in a service band.  Upon his discharge, Tapscott returned to Los Angeles to find that the LAPD, operating under Chief William H. Parker, had dismantled the Central Avenue arts scene.  While on tour with the Lionel Hampton orchestra in 1959, Tapscott determined to resettle in Los Angeles, hoping to reforge the communicative link between black artists and the community that had been lost on Central Avenue.

Tapscott envisioned an orchestra which could simultaneously preserve black culture, perform original music, and foster community involvement.  With local musicians Tapscott formed the Underground Musicians Association (UGMA) in 1962, which then established the Pan Afrikan Peoples Arkestra (Ark as in Noah’s– to serve as a life raft for black history and culture).  Responding to a perceived disconnect between black Los Angeles and its rich African history, the Arkestra engaged the youth through musical instruction, revised history courses, and remedial reading and math classes.  The Arkestra frequently performed in public schools, parks, community centers, churches, hospitals, and prisons – places it felt its message was needed.

Although the Arkestra played in support of diverse political groups, internally it stressed only the importance of self-expression.  The Arkestra did, however, develop a key relationship with the Black Panther Party.  Tapscott and Elaine Brown composed “The Meeting,” which became the Panthers’ anthem, and the Arkestra performed original musical arrangements to back Elaine Brown on her albums Seize the Time (1969) and Elaine Brown (1973).

In 1975 Tapscott institutionalized the UGMAA as a nonprofit organization.  This allowed the foundation to pursue grants and other forms of financial support, while also expanding its social programs.  The Arkestra’s free breakfast program continued while free arts classes ranging from drama to music theory to painting and poetry were offered to the community.

Until his death from lung cancer in 1999, Tapscott continued to encourage any community member with an artistic spirit to perform in the Arkestra, embracing poets, dancers, and even improvisational martial artists.  It was Tapscott’s hope that a positive experience in the arts would extend to other areas of life, and that these positive experiences would bind the community together.