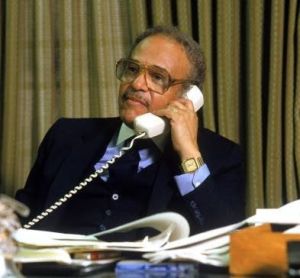 Benjamin L. Hooks is most notably known for serving as leader of the National Association for the Advancement of Colored People (NAACP) from 1977 to 1992.  Born on January 31, 1925 in Memphis, Tennessee to Robert and Bessie White Hooks, he was the fifth of seven children.

Hooks grew up in racially segregated Tennessee. He attended LeMoyne-Owen College in Memphis from 1941 to 1943 but graduated from Howard University in 1944.  He then joined the U.S. Army and recalled watching Italian prisoners he guarded eat at restaurants that excluded him and other black soldiers.  He left the army in 1945 as a staff sergeant and soon afterwards enrolled at DePaul University in Chicago to study law because no Tennessee university would accept him because of his race.  Graduating in 1948 with a Juris Doctor (J.D.) , Hooks returned to Memphis.  Four years later he married schoolteacher Frances Dancy in Memphis.

In 1956 Hooks became a Baptist minister and one year later joined the Southern Christian Leadership Conference (SCLC) then headed by Dr. Martin Luther King.   By the early 1960s Hooks, now a member of the National Association for the Advancement of Colored People (NAACP), helped organize sit-ins in Memphis.  By the late 1960s Hooks was pastor at Great Middle Baptist Church in Memphis and at Greater Mount Moriah Baptist Church in Detroit.  Hooks was a member of Omega Psi Phi and Sigma Pi Phi fraternities.

In 1965 Tennessee Governor Frank G. Clement appointed Hooks to serve as a judge in Tennessee’s criminal court.  He was the first African American to hold a judicial appointment in the state’s history.  Seven years later, President Richard Nixon nominated Hooks to be the first black member of the Federal Communications Commission (FCC).

Hooks served on the Federal Communications Commission from 1972 to 1977.  While there he created opportunities for people of color to obtain broadcast licenses and lobbied successfully for tax breaks for white owners who sold radio or television stations to blacks and other people of color.  He also campaigned to improve the image of blacks in the media.

In line to become Chairman of the FCC, Hooks surprised many observers by accepting the offer to become executive director of the NAACP.  At that time the organization experienced declining membership.  With major civil rights and voting rights legislation in place, many people no longer actively supported the NAACP and similar organizations and some questioned their continued relevance.  Hooks challenged that idea and established the twin goals of increasing the NAACP’s membership and erasing its debt.

Hooks’s fifteen year tenure as Executive Director was often controversial.  He publicly clashed with NAACP board chair Margaret Bush Wilson.  He established partnerships with major corporations leading some to fear the organization would depend on corporate support.  Also many inside and outside the NAACP felt he failed to modernize the organization and ignored post civil rights era problems facing blacks such as the growing underclass, the AIDS crisis, and the continued deterioration of the black family.  Hooks resigned as Executive Director in 1992.

Hooks returned to Memphis where he became an adjunct professor in the Political Science Department at the University of Memphis.  In 1996 the University created the Benjamin L. Hooks Institute for Social Change.  In 2007, President George W. Bush presented Mr. Hooks with the Presidential Medal of Freedom.  Rev. Benjamin Hooks died in Memphis on April 15, 2010 at the age of 85.