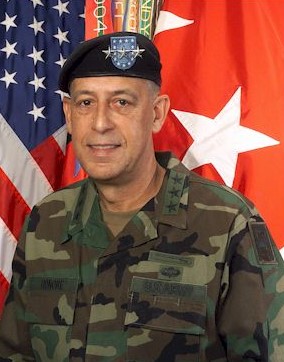 Russel L. Honoré is a three-star general known for his relief work during Hurricane Katrina. He was born in Lakeland, Louisiana during a hurricane in 1947 to farmers Lloyd Honoré and Eudell St. Armant Honoré.  As one of twelve children, Honoré became the first in his family to attend college when he enrolled at Southern University in Baton Rouge, Louisiana.  Majoring in vocational agriculture, he intended to become a dairy farmer but his experience in the university’s Army ROTC program redirected his ambition. With a bachelor’s degree and an Army officer’s commission, he began active military service in 1971.

During his military career, Honoré went on numerous tours of duty that included Germany and South Korea. He was assigned to several command staff positions in Washington, D.C. as well as military installations in Georgia (Fort Benning and Fort Gillem) and Texas (Fort Hood). He served in the Standing Joint Force Headquarters-Homeland Security, U.S. Northern Command until 2004 when he was charged with training First Army troops destined for service in Iraq. When Hurricane Katrina struck New Orleans on August 29, 2005, Honoré was ordered to direct the Joint Task Force-Katrina which entailed coordinating and supervising all active-duty troops from every military branch for rescue, recovery, and security.

In contrast to the slow, inept response to the disaster by the Federal Emergency Management Agency (FEMA), Honoré’s stern management style and no-nonsense attitude characterized him as a model of efficiency and made him a popular figure among the press. His concerns for the citizens affected by the hurricane catapulted him into the national spotlight.

Honoré retired from the Army in 2008 and directed his attention to educating the public on disaster planning in order to promote a “culture of preparedness.” He published Survival: How a Culture of Preparedness Can Save You and Your Family from Disasters in 2009 and Leadership in the New Normal in 2012. He also published articles on military affairs and disaster preparedness in the Journal of Public Health Management and Practice, the Crisis Response Journal, Military Review, and Armor.

For his service work and distinguished military career, Honoré was awarded many recognitions and honors such as the Distinguished Service Medal, Legion of Merit, Bronze Star Medal, Omar N. Bradley Spirit of Independence Award, and honorary doctorates from Southern University and Stillman College.

Lieutenant General Honoré and his wife, Beverly, reside in Baton, Rouge, Louisiana. They have two sons, Steven and Michael, and two daughters, Kimberly and Stephanie.

Russel L. Honoré, Survival: How a Culture of Preparedness Can Save You and Your Family from Disasters (Simon and Schuster, 2009); Tim Murphy, “How a Hard-Charging General Became an Environmental Crusader,” in Mother Jones(January-February 2015); Russel Honoré’s Linked in site at https://www.linkedin.com/in/russel-honore-6a2b66105.