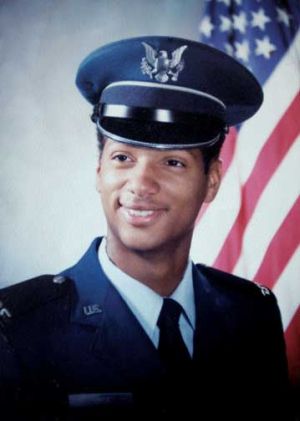 LeRoy Homer Jr., co-pilot of United Airlines Flight #93, was born on August 27, 1965 in Long Island, New York.  Homer and his three sisters were raised on Long Island by their German mother, Ilse, and their African-American father who died from a stroke when Homer was twelve.  Homer’s interest in airplanes started at an early age and he began taking flying lessons when he was fifteen.  He joined the Air Force and after graduating from the Air Force Academy in Colorado Springs, Colorado, he served as a pilot in both the Desert Shield and Desert Storm military operations in the Middle East and later flew aircraft in humanitarian operations in Somalia.  Homer served seven years on active duty in the Air Force, eventually becoming a Captain before switching into the reserves, where he rose to the rank of Major.

Homer’s life was tragically cut short at the age of 36 when his hijacked plane crashed.  On September 11, 2001 Homer was co-piloting United Airlines Flight #93 from Newark, New Jersey to San Francisco, California when four terrorists hidden among the 37 passengers hijacked the plane. It is believed that this particular plane was headed for the United States Capitol, but the plane’s difficult auto-pilot system prevented that. Homer and Captain Jason Dahl were overpowered when the terrorists rushed the plane’s cockpit but it is believed they were not immediately killed as the flight recorder indicated that the terrorists gave orders to groaning men who were on the floor. It is unknown if they died before or during the crash of Flight 93.

What is known is that members of the crew and passengers attempted to rush the cockpit to regain control of the plane. Their actions prevented the jet liner from reaching its intended target in Washington, D.C.  Flight 93 crashed into a field near Shanksville, Pennsylvania killing all the remaining people on board. LeRoy Homer’s widow, Melodie, created the LeRoy Homer Foundation in 2002, which provides financial support for young people seeking a profession in aviation.