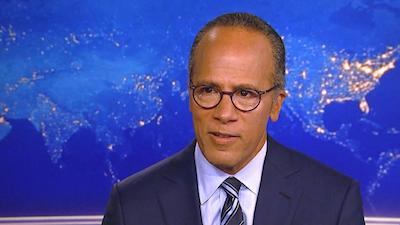 Lester Don Holt Jr. is an American journalist who anchors the weekday edition of NBC Nightly News. He also anchors for Dateline NBC. Holt was born in Marin City, California, on March 9, 1959, to June (DeRozario) Holt and Lester Don Holt Sr. His maternal grandparents were Jamaican; his maternal grandfather was of half-English and half-East Indian descent. While growing up Holt lived briefly in Alaska.  Holt graduated from Cordova High School in Rancho Cordova, California, and attended California State University, Sacramento, where he majored in government but never graduated.

In 1981 Holt started to work for CBS at the age of 22 when he was hired as a reporter for WCBS-TV in New York City. In 1982 he became a reporter and weekend anchor on KNXT in Los Angeles but returned the next year to WCBS-TV as a reporter and weekend anchor. In 1986 Holt moved to WBBM-TV in Chicago where he spent 14 years anchoring the evening news. Holt worked at the anchor desk, but he also reported at troubled spots around the world, including Iraq, Northern Ireland, Somalia, El Salvador, and Haiti.

In 2000 Holt joined MSNBC, but in 2003, he gained full-time duties at NBC News where he became a substitute anchor for NBC Nightly News and Today. Holt also became a full-time co-anchor of Weekend Today following the untimely death of previous co-anchor David Bloom. In addition, he anchored a two-hour daily newscast on MSNBC.

On May 9, 2007, Holt was named anchor of the weekend edition of NBC Nightly News, succeeding John Seigenthaler. Holt also hosted a TV special on the History Channel about 9/11 conspiracy theories and served as a sports desk reporter for NBC Sports’ coverage of the 2008 Summer Olympics that took place in Beijing, China. That same year, he narrated a documentary on the Sci-Fi Channel about crystal skulls. Holt also hosted Dateline on ID, an edition of Dateline NBC shown on the Investigation Discovery Network. Given his many simultaneous assignments, Holt was already well known to millions of television viewers in a variety of audiences across the United States.

In 2015 Holt became the permanent NBC Nightly News anchor following Brian Williams’s suspension from the show. Williams was later reassigned to MSNBC after his suspension ended. The following year, Holt moderated the Democratic candidates’ debate in January 2016 alongside a panel of NBC reporters. He also moderated the first presidential debate between presidential candidates Hillary Clinton and Donald Trump on September 26, 2016. Holt has also made cameo appearances on films, which include The Fugitive (1993), Primal Fear (1996), and U.S Marshals (1998). Holt has appeared on television shows like Due South, Early Edition, and Warehouse 13. Holt also announced the 2006, 2007, and 2008 Westminster Kennel Club Dog Show for the USA Network.

Lester Holt also won numerous awards, including Robert Kennedy Journalist Award (1990), an honorary doctorate from Pepperdine University (2012), honorary doctorate from University of California Sacramento (2015), and he was inducted into the California Hall of Fame in 2015. Holt married Carol Hagen in 1982. The couple has two sons, Stefan and Cameron.