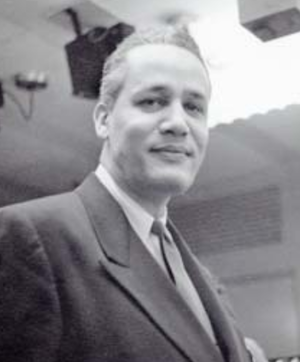 Holmes moved to Pennsylvania in 1940 to work as a water and fuel analyst at the Erie Lighting Company. While there, he responded to a notice issued by the government’s Civil Pilot Training Program offering flight training scholarships to those passing a competitive exam. Taking advantage of this opportunity, he obtained his pilot’s license in 1941 and later that year successfully completed the Civil Aeronautics Administration’s program that prepared college-educated pilots to become air traffic controllers. When posted to the New York airway traffic control center, he became the nation’s first black air traffic controller. Very light-skinned, it was not until he identified himself as a Negro and applied for a promotion that he encountered racial discrimination.

Miffed at being denied promotion as an air traffic controller, in the summer of 1942, Holmes entered the U.S. Navy when he found he already had the qualifications to get a commission as an ensign. Holmes was granted that rank before the Navy discovered he was African American. The U.S. Navy would not officially allow African Americans to be officers until 1949. Holmes enrolled in a one-year program that was intended to produce flight instructors. Once the Navy had possession of his birth certificate and flagged him as black, he was allowed to complete the program but was instead assigned to a Navy personnel office in New York to interview prospective aviation cadets.

Despite the Navy’s official prohibition of black officers, Holmes was promoted to Lieutenant Junior Grade (LTJG) and in April 1944 sent to Naval Air Station (NAS) Dallas, Texas, to fly trainer planes to bases across the United States. Several months later, he joined a Navy air ferrying squad at Terminal Island, California, from whence he delivered an assortment of single-engine planes (among them the fighter planes F4U Corsair, SB2C Helldiver, F6F Hellcat, and TBF Avenger) to military bases. Near the close of World War II, he was designated a lead pilot for group flights.

Released from active military duty in 1946, Holmes was listed as white on his discharge papers. Returning to civilian life, Holmes would earn two law degrees from Brooklyn Law School in 1954 (LL.B. in 1954 and LL.M. in 1955). Despite his exceptional training and education, Holmes spent the rest of his adult life working for the Federal Aviation Administration (FAA) in New York City and Washington, D.C. He retired from the agency as a GS-15 hearing officer in 1973. Although he worked for the FAA, he would never again fly planes in an official capacity. A longtime resident of Mitchellville, Maryland, Oscar W. Holmes Jr., died there on November 5, 2001. He was survived by his wife, Augusta Thomas Holmes, and three children.