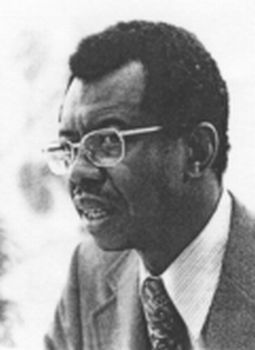 Civil rights leader and intellectual, Moses Carl Holman, was born to Moses and Mamie Durham Holman on June 27, 1919. Although born in Minter City, Mississippi, Holman was raised in St. Louis, Missouri, where his father worked in a steel mill.  As a child Holman loved to write. By the age of nineteen Holman was the first African American to win the annual radio scriptwriting award from the Chicago radio program, Dr. Christian. Holman attended Lincoln University in Jefferson City, Missouri, graduating in 1942. He earned a master’s degree in English from Chicago University in 1944 and a master’s of fine arts from Yale University in 1954.

In 1948 Holman became an English professor at Clark College (later Clark Atlanta College) and held that post until 1962. During these years Holman became increasingly involved with civil rights. He helped to form the Committee for Cooperative Action in the early 1950s and became an unofficial advisor for students active in Atlanta area sit-in protests in 1960. Holman also became the editor of the Atlanta Inquirer, a black journal which reported on civil right activities in the city. While at Clark, Holman met and married his wife, Marielle, with whom he had three children.

Holman moved to Washington D.C. in 1962, where he became the information officer at the US Commission on Civil Rights and then deputy director in 1966. Two years later in 1968 he joined the National Urban Coalition (NUC), which was formed in 1967 in response to the devastating race riots around the country. After becoming president of the NUC in 1971, Holman led the organization’s efforts in helping American cities address critical race relations issues. Concerned with the oppression of all minorities, Holman strengthened the relationship between African Americans and Mexican Americans, but also collaborated with other people of color as well.

As a strong advocate for education, Holman promoted “duel literacy,” which urged students to become well versed in reading, writing and speaking, as well as in science, math and technology. He also helped to develop the “Just say YES to a Youngster’s Future” program, which encouraged black and Latino males and girls of all racial backgrounds to learn math, science, and technology.

Throughout his life Holman maintained his passion for writing, primarily for poems and plays. Although he wrote about the broad aspects of the African American struggle and visions for the future, he also devoted much of his written works to personal challenges he faced during his lifetime.  Holman was a member of Sigma Pi Phi fraternity.