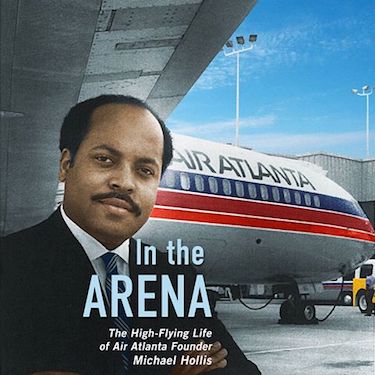 Atlanta attorney Michael R. Hollis founded one of the earliest black-owned airlines, Air Atlanta, in 1984. Hollis was born in Atlanta, Georgia, on October 22, 1953, the youngest of five children of Flem H. Hollis, a Pullman porter, and Virginia R. Hollis, an official with the Atlanta Housing Authority. Growing up in a segregated neighborhood of Atlanta in the late 1950s and 1960s, Hollis witnessed non-violent campaigns across the South as well as the leadership of fellow Atlanta resident, Dr. Martin Luther King Jr.

By the time he was fifteen, Hollis was elected president of the Atlanta Youth Congress. Through this organization, he met influential Atlanta leaders, including then-Mayor Ivan Allen Jr., Andrew Young, Julian Bond, Vernon Jordan Jr., H.J. Russell, and the man who would one day be the first black mayor of Atlanta, Maynard H. Jackson.

Hollis graduated from Booker T. Washington High School in Atlanta and then Dartmouth College where he earned his bachelor’s of arts degree, followed by a Juris Doctorate (JD) from the University of Virginia’s School of Law. While a student at Dartmouth, Hollis served as student advisor to Dartmouth College President, John George Kemeny. While at the University of Virginia School of Law, he was the first African-American to be elected national president of the thirty-thousand-member student division of the American Bar Association.

After passing the bar in Virginia, Hollis worked briefly with the law firm of Hansell and Post in Atlanta before in 1979 being appointed by President Jimmy Carter as associate chief counsel of the president’s Commission on the Accident at Three Mile Island (known as The Commission) in Middletown, Pennsylvania. Hollis would later relocate to New York City where he served as Vice President of Public Finance with Oppenheimer and Company from 1981 through 1983.

In 1980 at the age of twenty-seven, Hollis presented a business plan to the National Alliance of Postal and Federal Employees (NAPFE) to create a black-owned airline. NAPFE invested $500,000 in Hollis’s plan, resulting in Air Atlanta, which was officially launched in February 1984. The airline was short-lived and filed for bankruptcy in April 1987.

Hollis then teamed with Atlanta builder, H.J. Russell, to establish Hollis Communications, which owned an Atlanta radio station that was later sold to Cox Enterprises. In the early 1990s, Hollis launched and sold Hanover Credit Company, and then a few years later, he established Blue-Sky Petroleum Co. with his older brother, James B. Arnold. Blue-Sky owned dozens of convenience and petroleum retail stores in metro Atlanta. In 2003 he and another brother, Julius Hollis, formed a partnership with JP Morgan Chase to establish Nevis Securities, LLC, a registered black-owned financial services company. Two years later, President George Bush appointed Hollis executive director of the U.S Virgin Islands Housing Authority. In 2007 Hollis was appointed by the Fulton County Commissioner to serve on the board of directors for the Fulton-DeKalb Hospital Authority (formerly Grady Hospital).

Michael R. Hollis died on June 18, 2012, in Atlanta from a prolonged illness. He was 58 and survived by his wife, Dena Hollis.