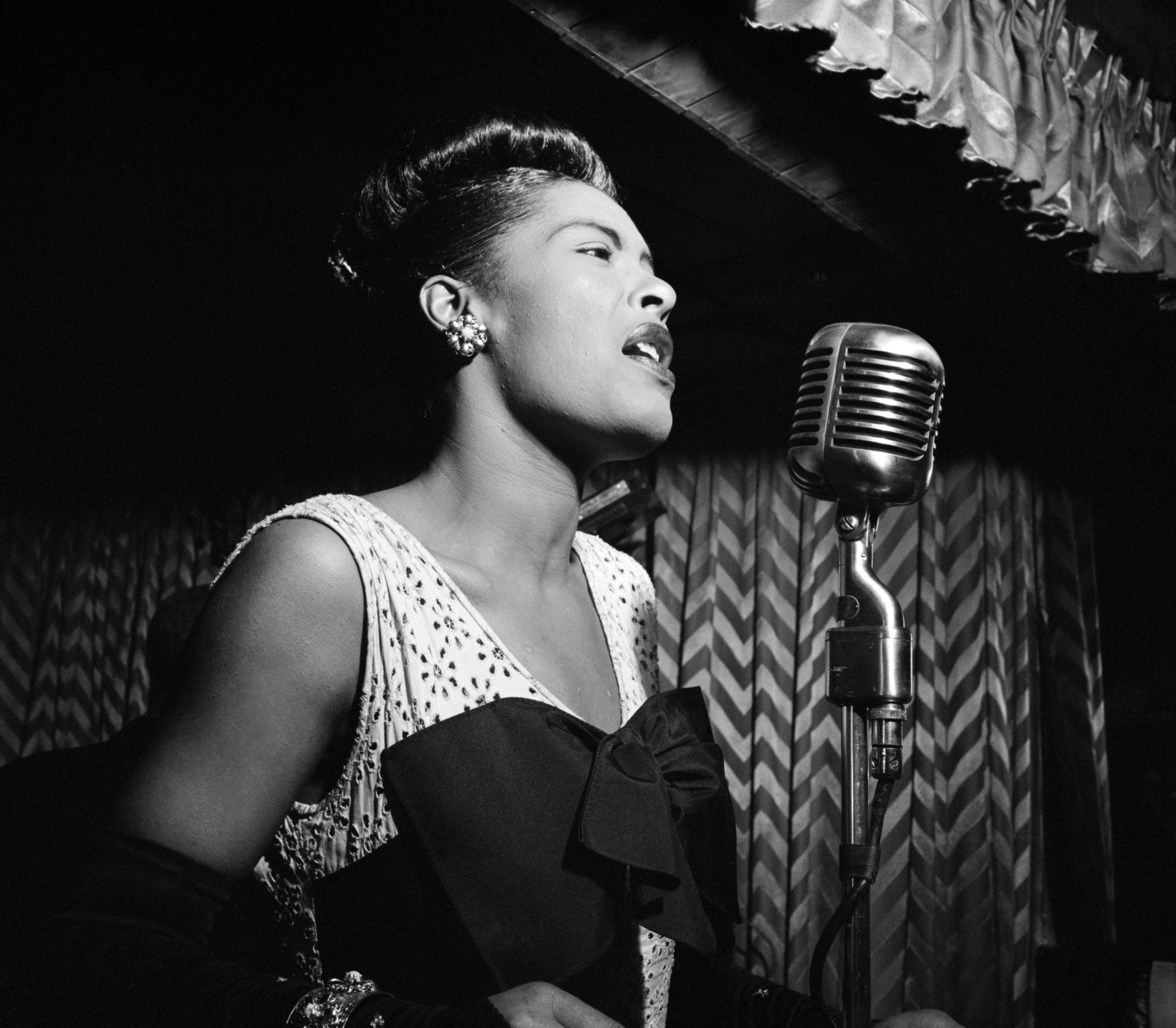 Billie Holiday is considered by many critics and fans to have been one of the most important jazz vocalists of the twentieth century. Her difficult life of poverty, abusive relationships, and drug abuse helped give her voice a deep, raw emotion that was expressed in the music she sang.

Billie Holiday was born Eleanora Fagan on April 7, 1915, in Philadelphia, Pennsylvania, to teenaged unmarried parents, Sarah Julia “Sadie” Fagan and Clarence Holiday.  Not long after Eleanora’s birth, Clarence Holiday abandoned his family to pursue a career as a jazz banjo and guitar player.

Because her mother worked as a maid on passenger railroads, Holiday was raised by her half-sister’s mother-in-law, Martha Miller. Holiday frequently skipped school and was often brought before juvenile court. By the age of eleven, Holiday had dropped out of school. After she fought off an attempted rape in 1926, she was held in protective custody and released in 1927 at the age of twelve.

By the age of fourteen, Holiday was a prostitute in New York’s Harlem. After a brief period when she and her mother were in jail for prostitution, Holiday escaped that life by singing in Harlem nightclubs. She changed her name, choosing her first name after a favorite movie actress Billie Dove, and adopting the surname of her absent musician father Clarence Holiday.

In 1933, record producer John Hammond heard Holiday sing and arranged for her to make her debut recording in November of that year at the age of eighteen with the Benny Goodman Band. Her recording, Riffin’ the Scotch, sold five thousand copies and by 1935, Holiday had signed with Brunswick Records. She teamed with Bandleader Teddy Wilson and produced a number of jazz hits. She also reconnected with jazz saxophonist Lester Young, whom she first met in 1934. Young gave her the nickname “Lady Day,” and she in turn called him “Prez.”

Beginning in 1937, Holiday worked with Count Basie and by 1938 with Artie Shaw, becoming the first black woman singer to tour with a mostly white band. On April 20, 1939, Holiday recorded her most controversial song, Strange Fruit, which was an unabashed protest of Southern lynching. It became her second biggest selling record but it also prompted a visit from the FBI. Her most popular recording, God Bless the Child, came when Holiday’s mother, who became a restaurant owner, refused to give Holiday money.  She reportedly stormed out the restaurant saying, “God bless the child that’s got his own.” A band member heard the words, turned them into a song, and Holiday recorded it in 1940. God Bless the Child became Holiday’s only million-selling record.

After 1940, Holiday moved away from jazz and began to record ballads such as Lover Man, Don’t Explain, and Good Morning Heartache. She performed at venues such as a sold-out Carnegie Hall in 1948 and later that year starred in a Broadway musical titled Holiday on Broadway. Yet her success was not enduring. Often recounting the misery in her personal life in song during this period from several abusive husbands, she expressed her emotions in her voice and created extraordinarily powerful recordings against a background of despair and depression. Her addiction to heroin, however, sent her life in a rapid downward spiral in the late 1940s. She was repeatedly arrested and eventually lost her cabaret license in 1950.

Holiday’s last major hit, Fine and Mellow, was released in 1957. By that point, the years of addiction had taken a toll on her body and voice. Forty-four-year-old Billie Holiday died on July 17, 1959, of cirrhosis of the liver in Metropolitan Hospital in New York City.