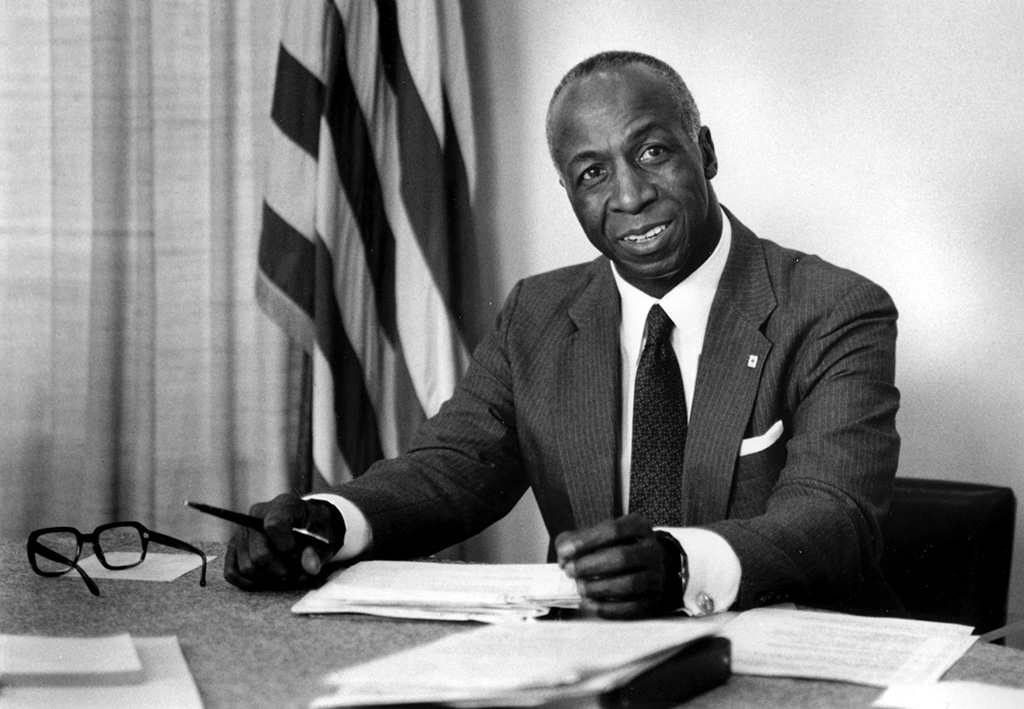 Educator, diplomat and businessman, Jerome Heartwell Holland was born on January 9, 1916 in Auburn, New York. The parents of Holland, and that of his twelve other siblings, were Robert Holland, a gardener/carpenter, and Viola Bagby Holland. For the entirety of his life, Holland maintained the nickname “Brud” given to him by a sibling who called him “Brudder” growing up.

Holland attended Auburn High School from 1931 to 1935, where he began playing football. In 1935, Holland was accepted to Cornell University and became the first African American to play for the school’s football team. Holland was an All-American athlete at Cornell for two-consecutive years, 1937 and 1938.

Upon graduation in 1939, he entered Cornell’s graduate program and earned an M.A. in sociology in 1941.  He was hired by Lincoln University in Pennsylvania, where he taught sociology and physical education. In 1941 Holland also married Madeline Smalls and the couple had two children before divorcing in 1944.

Soon after the U.S. entered World War II, Holland went to work for Sun Shipbuilding and Drydock Company of Pennsylvania where because of wartime demand for labor, he earned considerably more than his teacher’s salary at Lincoln University.

In 1948, Holland married Laura Mitchell, and had two more children. In 1950 Holland earned his Ph.D. from the University of Pennsylvania.  Three years later he was named President of Delaware State College serving from 1953 to 1959.  In 1960 he became President of Hampton Institute (now Hampton University), where he remained for a decade.

In 1970 President Richard Nixon named Holland the U.S. Ambassador to Sweden, a post he held until 1972.  This was a rare appointment.  Holland was only the second African American assigned as ambassador to a European nation.

After serving as a diplomat, Holland occupied a series of influential positions in such corporations as AT&T, General Foods.  Also in 1972 he became the first African American to serve on the board of directors for the New York Stock Exchange, a post he held until 1980.

While still serving as Hampton’s President, Holland also became a member of the American Red Cross’s Board of Governors.  He served on the non-profit’s board from 1964 to 1970.  He returned to the Red Cross board in 1977 and remained in that capacity for the rest of his life.

Jerome Heartwell Holland, a member of Sigma Pi Phi fraternity, died on January 13, 1985, at 69. After his death, Holland was awarded the Presidential Medal of Freedom by President Ronald Reagan.