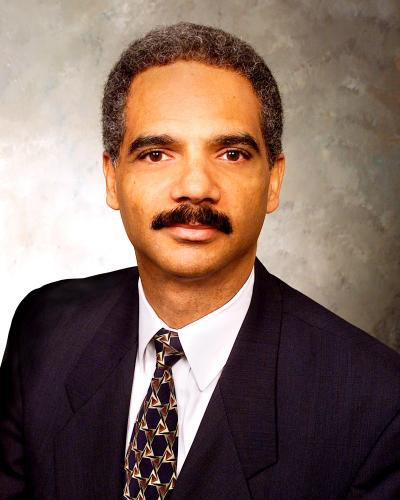 Eric H. Holder, Jr., U.S. Attorney General since 2009, was born on January 21, 1951 in the Bronx, New York to parents of Barbadian descent, Eric, a real estate agent and Miriam Holder, a telephone operator.  Holder was raised in East Elmhurst, Queens, a community which included a number of famous African Americans such as Louis Armstrong, Ella Fitzgerald, Dizzy Gillespie, Harry Belafonte, and Sidney Poitier. Civil rights activist Malcolm X lived two blocks from young Holder and on one occasion in 1964, then recently crowned heavy weight champion Muhammad Ali entertained him and other community children on the steps of the Malcolm’s house.

Holder graduated from Stuyvesant High School in Manhattan and in 1969, at the height of the Vietnam War protests and Black Power movement, he entered Columbia University where he participated in sit-ins by African American students. Holder also played collegiate basketball and became co-captain of his team.  In 1973, he earned a Bachelor of Arts degree in U.S. history from Columbia and then entered Columbia University Law School, earning a J.D. in 1976.  While in law school Holder served as a law clerk for the National Association for the Advancement of Colored People Legal Defense and Educational Fund (NAACP-LDF).

In 1976, upon completing his law degree Holder joined the United States Department of Justice’s newly established Public Integrity Section, prosecuting misconduct by government officials. While there he participated in the prosecution of South Carolina Democratic Congressman John Jenrette for bribery. During the 1970s, Holder also developed a professional relationship with other rising black Washington D.C. attorneys such as Valarie Jarrett, Alexis Herman, and Charles Ogletree.

In 1988, President Ronald Reagan named Holder an Associate Judge of the Superior Court of the District of Columbia where he presided over civil and criminal trials.  Holder resigned from his judgeship in 1993 to accept President Bill Clinton’s appointment as U.S. Attorney for the District of Columbia, becoming the African American to occupy that position.  As U.S. Attorney, he directed the federal government’s case against Illinois Democratic Representative Dan Rostenkowski for his role in the Congressional Post Office Scandal.  In 1997, Clinton nominated Holder to be Deputy Attorney General under Janet Reno.  With subsequent Senate confirmation, Holder became the first African American to fill that position. Holder served briefly as Acting Attorney General under President George W. Bush until the confirmation of Attorney General-designee John Ashcroft.

Holder returned to private practice in 2001 and became a partner in the law firm of Covington & Burling in Washington, D.C. where he represented such high profile clients as the pharmaceutical corporation Merck and the National Football League.  In 2007, he represented the NFL during its investigation of dog fighting allegations against the Atlanta Falcon’s quarterback Michael Vick.  In 2007, Holder joined Barack Obama’s presidential campaign as a senior legal advisor and served on the 2008 vice presidential selection committee.

On December 1, 2008, President-Elect Obama nominated Holder to become the 82nd Attorney General and the first African American to hold that post.  As attorney general, Holder supported LGBTQ rights and initiated a crusade against racial profiling.  In a 2009 Black History Month speech, Holder argued that the United States was a “nation of cowards” regarding race relations.   His comments generated a backlash from numerous political pundits.

In August 2014, Holder became controversial again when he ordered the Department of Justice to investigate events surrounding the death of unarmed black teenager Michael Brown at the hands of Ferguson, Missouri police officer, Darren Wilson. He ordered the DOJ to investigate possible civil rights violations related to the shooting and excessive force Ferguson police used against Brown supporters following the incident.

Holder, a member of Sigma Pi Phi Fraternity, is married to obstetrician Sharon Malone.  They live in Washington, D.C. with their three children.