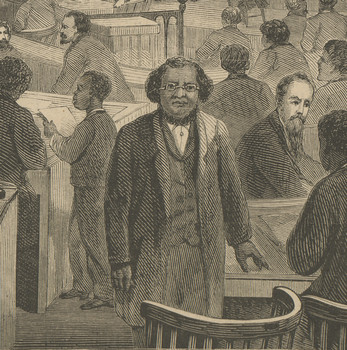 Willis Augustus Hodges was born into a free black family on February 12, 1815, in Blackwater, Princess Anne County, Virginia. Both his parents were free, as well as his grandmother. His grandfather was enslaved as were his parents, but since Hodges’ parents were free, he was born into freedom as well. Nonetheless, he lived more than half of his life in a state where the vast majority of African Americans were enslaved.

Willis Hodges, a free black man, became an advocate for the enslaved blacks around him. He fought for just treatment of the enslaved and the small free black population of Virginia. In that regard, he became a rare black abolitionist living in a slave state. Hodges was also clandestinely a conductor on the Underground Railroad, helping slaves from further south pass through the area to the North.

The Nat Turner Rebellion in Southampton County, Virginia, in 1831 generated a repressive backlash on enslaved and free blacks. The Virginia State Assembly imposed a number of restrictions, including the denial of voting rights to the small number of free blacks who met the property requirements for the franchise. Many of free blacks fearful of further repression or even violent attack, moved out of the state, including Willis Hodges and his family who followed brother William and settled in New York. Despite moving north, the Hodge family kept the family farm that was the boyhood home of William and Willis Hodges.

Hodges intensified his abolitionist activities in his new home, Williamsburg, New York. He soon became one of the most outspoken black abolitionists in the state. By 1840 he ran his own newspaper, The Ram’s Horn. That paper and his other activities caught the attention of well-known abolitionists such as Frederick Douglass and John Brown, both of whom published articles in Hodges’ paper and secretly helped fund it. In 1848 Hodges was a delegate from Williamsburg to the National Convention of Colored Men held in Troy, New York.

He also criticized what he saw as the complacency of black Northerners, particularly those in New York City. He blamed this in part on city life and urged black urban residents settle on farms in the country. Even after the newspaper stopped publishing in 1846, Hodges continued to be a strong supporter of abolitionist causes, including John Brown’s Raid on Harpers Ferry in 1859.

After the Civil War ended, Willis Hodges returned to Princess Anne County, Virginia, and became involved in Republican politics. In 1867 he was the first black man elected to office in that county when he was chosen to serve in the State Constitutional Convention of 1867–1868.  He was later elected to the County Board of Supervisors represent the Kempsville District.  When the Democrats regained power, Hodges in 1876 returned to New York.

Hodges married Sarah Ann Corprew, although the exact date of their marriage is unknown. The U.S. Census of 1870 listed his age as fifty-five, hers as thirty-eight, and they had three children, Augustus, fourteen; Victoria, twelve; and Willis, seven. Willis Hodges died in 1890 in New York, although the exact time and place are unknown.