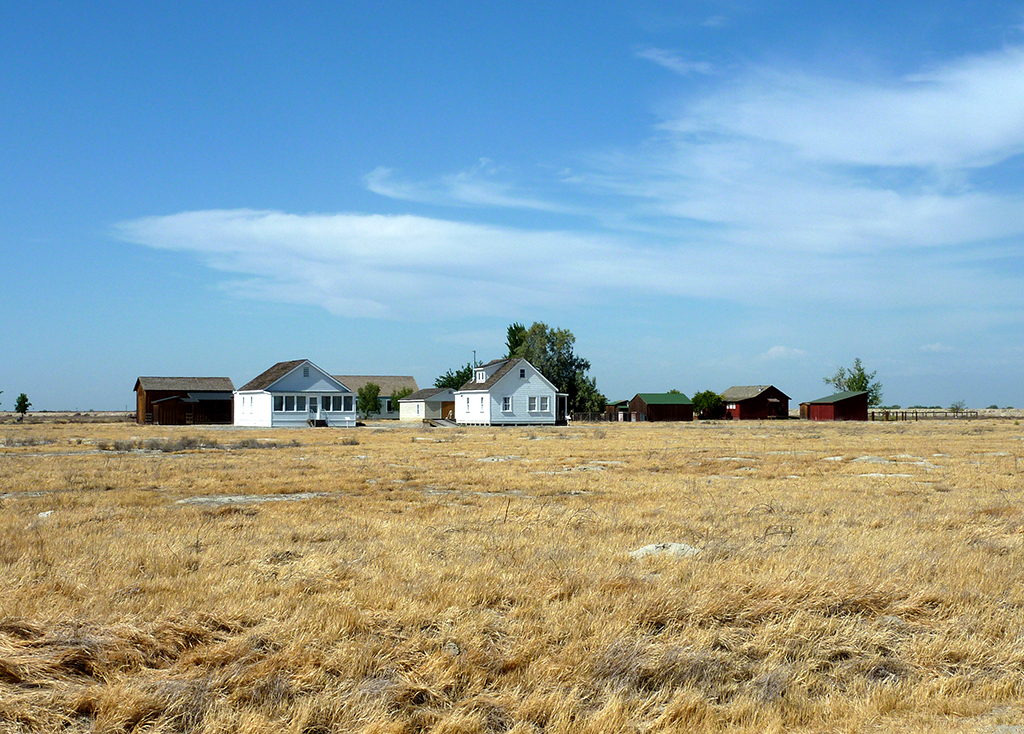 In the article below retired California State University, Fresno historian Robert Mikell explores the history of the only all-black town created in the Golden State.  He traces that history including the role of its principal founder, Colonel Allen Allensworth, from 1908.

Allensworth, the first town in California established exclusively by African Americans, was founded in 1908 by a group of men led by Colonel Allen Allensworth. Born a slave in Louisville, Kentucky in 1842, Allensworth became the highest ranking black officer in the U.S. Army when he retired in 1906.

As a boy, Allensworth was punished for learning to read and write which was unlawful for enslaved people in Kentucky and across the South.  During the Civil War, he escaped and sought refuge behind the Union line, where he worked as a civilian nurse in the Army Hospital Corps.

From 1863 to 1865, Allensworth served in the U.S. Navy and afterwards became an ordained Baptist minister. In 1871, Allensworth met Josephine Leavell, a school teacher, organist and pianist. They were married on September 20, 1877. Josephine Allensworth worked diligently with her husband to promote his educational and religious works. The couple had two daughters, Nellie and Eva.

In 1882, Allensworth discovered that of the four black Army regiments (the Buffalo Soldiers), there were no black chaplains.  He immediately sought that appointment.  On April 1, 1886, President Grover Cleveland appointed Rev. Allensworth as chaplain of the 24th Infantry at the rank of Captain, with the responsibility for the spiritual health and educational well-being of black soldiers in the regiment. At the time of his appointment he was only the second African American, after Henry Plummer, named to serve as a U.S. Army Chaplain. Allensworth retired as a lieutenant-colonel on April 7, 1906, having achieved the highest rank of an African American in the U.S. Armed Forces.

After his retirement, Allensworth traveled widely throughout the United States lecturing on the need for self-help programs which would enable African Americans to become more self-sufficient. In 1904, the Allensworth family decided to settle in Los Angeles.  One of Allensworth’ s goals was to identify a town-site in the state of California where African Americans might start a new life together outside the restrictions of the Jim Crow South.

In 1906, Allensworth met Professor William Payne who was born in West Virginia in 1885, but was raised in Ohio where his father worked in the coal mines. After completing high school, Payne attended Dennison University In Granville, Ohio, graduating with a bachelor’s degree in 1902.  Just before his graduation he met and married Zenobia B. Jones, who also attended Dennison University.

Payne served as Assistant Principal at Rendville School in Rendville, Ohio for seven years and later as a Professor at the West Virginia Colored Institute for two years. In 1906, Professor Payne and his wife moved to Pasadena, California where he hoped to be a “teacher of teacher.” Payne was not eligible to teach in Los Angeles because he lacked prior teaching experience in California. While in southern California, however, Payne met retired colonel Allensworth and the two men decided to pool their talents to create what was then termed a “Race Colony” for the improvement of African Americans across the nation.

Joining Allensworth and Payne to establish their race colony were three other men, Dr. William H. Peck, an AME minister in Los Angeles, J.W. Palmer, a Nevada miner; and Harry Mitchell, a Los Angeles Realtor. Allensworth selected a location in southwest Tulare County which had virgin soil and plentiful water. Together they created the California Colonization and Home Promoting Association and soon thereafter filed a township site legal plan on August 3, 1908 to form the town of Solito, which had a depot connection Los Angeles and San Francisco on the Santa Fe Railroad.  The town’s name was changed that same year to Allensworth, to honor its most prominent founder.

Town founders established the Allensworth Progressive Association as the official form of government to conduct its affairs. Townspeople elected officers and held town meetings to encourage the civic participation of all of its residents.  In 1912 Allensworth became a voting precinct and had its own school district encompassing thirty-three square miles. At its peak in the early 1920s, Allensworth had as many as 300 residents.

Once the school district was established in in 1912, the Allensworth School, costing $5,000, was built with funds donated by local citizens. It was the largest capital investment made by the community, epitomizing the importance of education for the town. The one-room schoolhouse included elementary, intermediate, and high school students. The school was governed by an elected body of three board members. The original trustees were Josephine Allensworth (who also served as the first teacher), Oscar Overr and William H. Hall.

Allensworth School also served as the town center for events and meetings.  The Allensworth Progressive Association, the Women’s Improvement League, the Debating Society, the Theatre Club, and the Glee Club all met in the building. The most memorable of the year, however, was commencement which took place in June at the end of each school year.

Allensworth was sanctioned a judicial district by the State of California in 1914, and soon afterwards Oscar Overr and William H. Dotson became the first African Americans to hold elected offices as Justice of the Peace and Constable, respectively. A branch of the Tulare County Library and a post office were established with Mary Jane Bickers serving as the first postmistress. On July 4, 1913, an official reading room was established in a separate library building.

Agriculture dominated the economy of Allensworth as several farmers moved in or near the township.  The town also had several businesses including a barber shop, bakery, livery stable, drug store, machine shop, and the Allensworth Hotel.

In keeping with Colonel Allensworth’ s idea of self-help and self-reliance programs, city leaders in 1914 proposed to establish a vocational education school based on the Tuskegee Institute model and the ideas of its founder, Booker T. Washington. Although it received support for a state funding appropriation from Fresno and Tulare County representatives in the California State Senate and Assembly, the proposal was defeated by the entire state legislature.

The town suffered a far greater loss later in 1914 when Colonel Allensworth died after being struck by a motorcycle while visiting Los Angeles. The town however continued to grow due to the leadership of Oscar Overr, the Justice of the Peace, and Professor William A. Payne, the school principal. New residents continued to arrive and the town continued to prosper until the early 1920s.

Allensworth’ s prosperity peaked in 1925 and after that date the lack of irrigation water begin to plague the town. Irrigation water was never delivered in sufficient supply as promised by the Pacific Farming Company, the land development firm that handled the original purchase.  As a result, town leaders were engrossed in lengthy and expensive legal battles with Company, expending scarce financial resources on a battle they would not win.

By 1930 the town’s population according to the U.S. Census, had dropped below 300 people, as residents and nearby farmers began to leave in search of other employment.  The deficient water supply would not sustain the agricultural and ranching enterprises at that time. The residents who remained behind attempted to keep the community alive by designing new methods of farming, creating other businesses, and drilling new water wells.

Yet through the early 1960s, the town continued to exist even if it did not thrive.  Then in 1966 the State of California discovered high levels of arsenic in the drinking water. Most residents left but 34 families remained, leaving Allensworth all but a ghost town.

One decade later, however, on May 14, 1976, the California State Parks and Recreation Commission approved plans to develop the Colonel Allensworth Historic Park on the central portion of the town. The process started in 1969 when Cornelius Ed Pope, an African American man draftsman with the Department of Parks and Recreation began a campaign to persuade State Park officials and the general public that the town-site had particular historic and cultural significance for California’s African American population. Pope related how as a boy he had lived in the house once owned and occupied by the Allensworth family. As a part of the restoration project, several buildings have been restructured to the likeness of the historic period of 1908-1918.